Question 2.
What would have been the points of view in the 1970s when the Land Ceiling Acts were passed?
Answer:
Points of view:

Question 3.
Do you think the peasant women gained from these reforms in any way? Give your reasons.
Answer:
We can say that they gained something.
Reasons:

Question 4.
Why was the end to vetti important for all kinds of peasants? What would the landlords have done to cultivate their lands now?
Answer:
‘Vetti’ is a black spot for humanity. Many struggles were led against this. So the end of it was important for all kinds of peasants. In olden days, there were no landlords as they are now. They appointed ‘Palers’ and ‘Coolies’ in their lands to work during cultivation.

Question 5.
Imagine that you are a tenant who got ownership over land when the Land Reform Act was implemented. Write down your feelings.
Answer:
“I got 4 acres of land according to this Act. I paid some amount for this. Till now I and my family members worked hard in our Dora’s fields. But from now onwards I am the owner of this land. We, the family members, work hard in our own field. We are so happy. We breathe- in the air of independence”.

Question 6.
Imagine that you are a landlord at the time of Land Reform Act. Describe your feelings and actions at that time.
Answer:
“Alas! Today is a bad day for us. I lost my 4000 acres of land. Till now my house is filled with bags of grains, wealth, servants and vetti people. But now I lost everything. By playing many tricks, I saved only 150 acres of land.
I feel very happy to see independent India but I lost all my wealth. How can we lead our life without wealth and power?”

Question 7.
Many people feel that the land reform actually harmed a large number of tenants – at- will. Do you agree with this view? Give reasons.
Answer:
I do agree with this to some extent.
Reasons:

Question 8.
Why was the Land Ceiling Act not implemented effectively even though the govern¬ment tried to make effective laws?
Answer:
The Act could not be implemented properly due to machinations of the landlords and also lack of sufficient political determination on the part of the government. 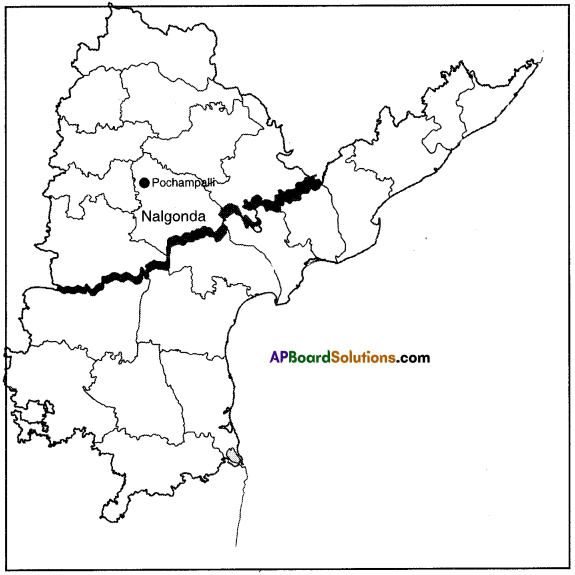 Question 11.
Read the first paragraph under heading ‘Rural Poverty at the time of Independence’ and answer the following: Are the conditions improved now? In what way?
Answer:
We can say that the conditions are improved now.
They are working as industrial labours also. They are leading their lives by working in laying roads, making of handicrafts etc. They are going to schools also. The agricultural labourers have a better demand now. Thus their conditions are improved.

Question 12.
Form a group of five students each. Discuss the experiences of elders of your area about the land ceiling. Know out whether the issue happen in that village as mentioned in the chapter. Prepare a report and submit in the class.
Answer:

We met 15 elders in this project. With this Act many were turned as beggars, some were escaped.
Some transferred the ownership of the lands to their relations, friends, labourers etc., and saved their properties. Some lost everything with this Act. They cried a lot.
On the whole the Act caused relief to some and pain to some.

Question 1.
While the slogan ‘Land to the Tiller’ meant that the tenant will get the land, what will happen to the landless agricultural worker, who works for wages? (Textbook Page No. 185)
Answer:
The conditions of the tenants were somehow improved. But the conditions of the landless agricultural workers remain the same. They are still in the same poverty.

Question 2.
Some people feel that the land reform laws only tried to help the landlords. Do you agree with them? (Textbook Page No. 186)
Answer:
Yes, I agree with them.
Giving compensation to the Zamindars, continuing them as owners of the Khudkasht etc., reveal this.

Question 3.
Some people feel that the land reform laws tried to transfer land and power to prosperous tenant farmers only. Do you agree with them? (Textbook Page No. 186)
Answer:
Yes, I agree with them. The reason behind it is the government made a rule that the tenants would be given land only if they paid some price for it. Those peasants who could pay became the owners of the land. Rest of them were remained as poor only.

Question 4.
Some others feel that the laws tried to strike a balance between the interests of different rural groups in order to minimise internal conflicts. Do you agree with them? (Textbook Page No. 186)
Answer:
Yes, I agree with them.
According to these laws, the Zamindars became landlords, some tenants became land owners and some poor became owners of banjar lands. So we can say that internal conflicts were minimised.

Question 5.
Some people think that it should have been implemented in 1950 while others feel that such a measure would have caused a lot of opposition. Discuss the two views in the class and decide which view you agree with. (Textbook Page No. 190)
Answer:
It is very difficult to implement these laws in 1950. “Acquisition of that much land from the owners, that too immediately after independence there might be a chance of inner conflicts and strong opposition. But there were many leaders like Sardar Vailabhai Patel. The government might meet the challenges arisen. So I also think that it should have been implemented in 1950.

Question 6.
Compare the implementation of Land Ceiling Act in West Bengal and in Andhra Pradesh discuss how the Act could be effectively implemented. (Textbook Page No. 191)
Answer:
We can say that the Act was implemented in a mean way.

Several landlords gave false declarations to the officers and did not reveal the excess land. Anticipating the Act several landlords transferred their lands in the names of their close relatives, friends, and even farm servants. There were also instances where fictitious divorces were taken in law courts to show husband and wife as separate families. In this way even those farmers who had surplus land as per the Act protected their lands and did not show any surplus. Some of the surplus land that was taken over by the government was not fit for cultivation.

One of the states in which the Land Ceiling Act was more efficiently implemented was West Bengal. The West Bengal government acted with great determination and mobilized the landless and small peasants to participate in the implementation of the ceiling laws.

The Act could not be implemented properly due to machinations of the landlords and also lack of sufficient political determination on the part of the government.

Question 9.
Who gained most and who did not gain at all? Do you think the landlords lost much? (Textbook Page No. 186)
Answer:
Zamindars gained most.
Reasons:

Reason: They remained unrecognized and as agricultural labourers.

Many of the laws were implemented tardily. Due to the delay in implementation the large landlords used it to their best advantage. Using the loop holes in the Tenancy Act the Zamindars regained control over the lands from the tenants. The Zamindars after abolition continued as big landlords claiming the land as their own. These lands were diverted to set up industries. For example, the Challapalli Zamindar showed 2650 acres under his sugar factory. But eventually they transformed as entrepreneurs in Andhra. But in Telangana they continued their domination into the twenty first century.

Question 13.
Observe the following table and fill in the blanks. (Textbook Page No. 189)

The Structure and Distribution of Landholdings in Andhra Pradesh, 1956-2006
Source: Directorate of Economic and Statistics (DES), Hyderabad.

Answer:
Reading the table: Read the figures for the year 1955-56 carefully. It tells us that, after the land reforms had been implemented 58% of farmers were small farmers with less than 2 hectares of land each. Even though they formed more than half of all farmers, they had less than 20% of cultivated land. On the other hand you can see that large farmers or landlords who were only about 10% of the farmers had about 38% of all cultivated land.
After the land ceiling was implemented in 1970s see the changes that took place. The number of small farmers who were …58..% increased/decreased to …83.. %. Medium farmers now were less in number and controlled …32% to 16..% more/ less land than before. Large landowners declined to less than …1.. % but still owned about …6.. % of land.

Question 14.
Why did the Land Ceiling Act become necessary? (Textbook Page No. 190)
Answer:
Many Acts after independence have not changed the ownership of lands in India. It changed Zamindars as landlords, landlords as big farmers. But it did nothing to the common poor.
The ownership of the land was only a few hands. So the Land Ceiling Act became necessary.