Question 1.
Why were the first elections difficult to conduct? List as many reasons as you can.
Answer:
An Election Commission was set up to conduct the elections in a free and fair manner. Making arrangements for the first elections was a large and complex task. First, a house-to-house survey was carried out to register the eligible voters.

People who contested elections belonged to political parties or were Independents. Election Commission gave a symbol to each of these candidates. These symbols were painted on the ballot boxes in which the votes had to be cast. The voters had to put their ballot paper into the box of the candidate they wanted to vote for. Screens were set up so that the voting (ballot) was secret.

Over 2,24,000 polling booths were set up across the country. Over 25,00,000 steel ballot boxes were made. Nearly 62,00,00,000 ballot papers were printed. About 10 lakh officials supervised the polls. Nearly 17,500 candidates had contested the elections across the country. Finally, 489 people were elected to the first Lok Sabha. The elections were conducted in a fair, free, impartial, and orderly manner, with very little violence. So we can say that the first elections were a large and complex task.

Question 3.
For which of the following subjects can laws be made by the Members of Parliament, which by the state assembly, and which can be made by both: agriculture, railways, village hospitals, police, posts and telegraph, electricity, factories?
Answer:

Question 4.
Name the two houses of the Parliament. Draw a table to show the similarities/ differences between them on the following aspects: term, number of members, more or less powerful, election process, voting for the President.
Answer:
There are two houses in the Parliament – Lok Sabha and Rajya Sabha.
Similarities / Differences

Question 5.
In the 2009 Parliamentary Elections, no single party won a majority. How was the government formed? Discuss with the help of your teacher and write a paragraph.
Answer:
The ‘Like-minded Parties’ who won in the elections formed as a Front ‘UNITED PROGRESSIVE ALLIANCE’. This front formed the government. In this Front INC has a majority.

Question 7.
There are some gaps in the information given in the Table below. Discuss with your teacher to find the missing information and fill in the blanks.

Question 9.
Following is a study of women’s representation in Parliament houses including that of India and other nations: 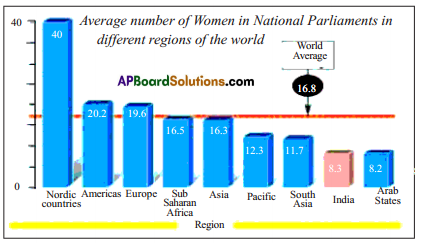 When the Parliament is in session, listen to the news on the radio or television or look in the newspapers and make a list of the events that take place. Write a page on any issue discussed in the Parliament, or draw a picture of the scene in Parliament when it is being discussed.
Answer:
The issue is belongs to separation of Telangana state. Separate Telangana state bill was introduced in the Loksabha. There was a long discussions and debates conducted in the Loksabha.

On the basis of petitions of Telangana people the government was decided to separate the Telangana people from A.P State. But in the Parliament majority of members were not accepted. During this time the members of the house joined together and conducted voting among them. And this was introduced in the Rajyasabha also and conducted voting in that house and was the final decision taken about the separate Telangana state. 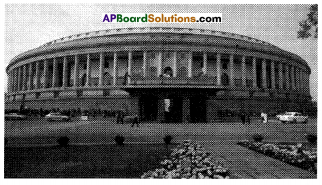 Question 1.
What do you think are the advantages of having a Parliamentary form of government in which the government members are answerable to the Parliament? (Textbook Page No. 162)
Answer:
Advantages:

Question 2.
Should the Parliament only make laws and not control the government in its functioning? Discuss in the class. (Textbook Page No. 162)
Answer:
There should be government control on laws made by government. Otherwise the implementation of it will be questionable. So the condition is framed.

Question 4.
Discuss the meaning of the following with your teacher. (Textbook Page No. 166) 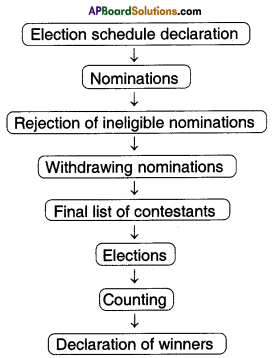 Nowadays, the elections are conducted in a procedure as mentioned above.

Question 6.
Write down some differences between the first elections and elections held today – ballot box and sheets, age of voting.
Answer:

Question 7.
Recall the laws about which we studied last year. Find out the new laws that are being discussed in state legislative houses and Parliament during their last meeting. (Textbook Page No. 166)
Answer:

These two bills, are discussed by the Parliament during the last meeting.

Question 10.
Azhar feels that it is better to give more powers to Rajya Sabha because they are mostly wiser people belonging to different political parties.
Mumtazfeels Rajya Sabha should not be given any more powers because they are not directly elected by people. What do you think about their feelings ? (Textbook Page No. 164)
Answer:
I support both the arguments. The thoughts of wiser people are always to be supported. So they should be given more powers. Likewise it is true that they are not elected by the people directly. So we should elect the wise people directly in election.

Question 11.
Can you think why the following illustration has Parliament on one side and people on the other ?

Answer:
The population of the country and the number of members of Parliament are in proportionate. If there is no support of the people, the parliament would be weakened. So it is shown like that.

Question 13.
A survey showed that among the uneducated and poor, the percentage of people who voted in 1996 was 61 %. However, it was only 53% among graduates. What could be the reasons for this difference? Discuss. (Textbook Page No. 167)
Answer:
The winners in the elections are doing no favour to the people. They are interested in improving their financial balances, assets and developing their personal relations. This may be the feeling of the graduates.

Question 16.
See the map and tables given in Text book P.No. 163 and answer the following questions. (Textbook Page No. 164)

Question 19.
Collect the photos of the current ones of the following and paste in the given boxes. (Textbook Page No. 170)
Answer:

Question 21.
Find out if there are any ministers from your state in the current Central government. (Textbook Page No. 170)
Answer:
Sri P. Ashok Gajapathi Raju – Minister of Civil Aviation.

Question 24.
Why were the first elections a large and complex task”? (Textbook Page No. 166)
Answer:
Refer answer (1) In Improve your learning.

Question 25.
Why should the voting be secret? (Textbook Page No. 166)
Answer:
To maintain the self-confidence in the voters, the voting should be secret.

Question 26.
Why do you think it is important to look at the percentage of people who cast their votes? What does it tell us? (Textbook Page No. 167)
Answer:
It shows the confidence of people in elections and also the pattern of voting. So it is important.

Question 28.
What were the opinions expressed by different people at the time of the first elections? (Textbook Page No. 167)
Answer:
Some people said, “The elections are ‘a leap in the dark’, not suitable for a country like India. India is a caste-based society in which many people do not accept the idea that everyone is equal. So it won’t be possible to have a democratic election.”

There were other people who were very hopeful. They said, “Indians have participated in the National Movement to gain freedom from the British. They want to elect a government of their own choice. They want the government to work towards creating a society where every¬one is treated equally. They also want the government to improve the living conditions of the people. Thus everyone should have an equal opportunity to elect a government of their choice.” To such people, the elections were ‘an act of faith’.