Question 1.
Create a table to show the various efforts of Gandhiji in national movement.

Question 2.
The national movement fought all attempts of the British government to deny democratic freedom and rights of the people. Give examples of the rights which the government tried to curtail and the movement launched against it.
Answer:

Question 3.
To what extent was the Salt Satyagraha successful in its objectives? Give your assessment.
Answer:
A wave of enthusiasm swept the country during the Salt Satyagraha. Sait laws were broken at many places and even women took part in the Civil Disobedience Movement. In Delhi alone, 1600 women were imprisoned. This movement was not confined to the Salt Satyagraha alone. Foreign-cloth shops and liquor shops were picketed and were burned. Hand spinning was taken up as a movement. British schools, colleges, and services were boycotted. The people joined in large numbers in this movement.

The combined struggles of the Indian people bore fruit when the Government of India Act of 1935 prescribed provincial autonomy and the government announced elections to the provincial legislatures in 1937.
Thus it was successful in its objectives.

Question 4.
Which of the following was part of the national movement?
a. Picketing shops that sell foreign clothes
b. Hand spinning thread to weave clothes
c. Burning imported clothes d. Wearing khaddar
e. All the above
Answer:
e) All the above

Question 5.
What were the different events that led to the partition?
Answer: 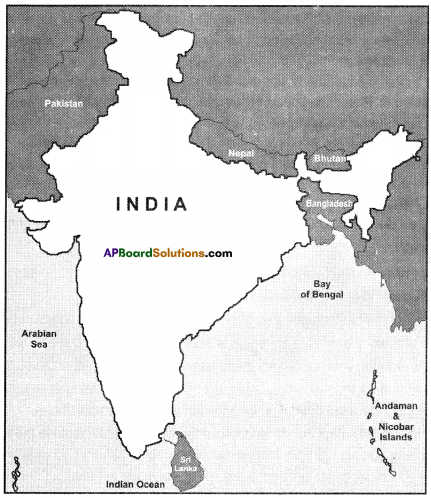 Both Pakistan and Bangladesh are our neighbouring countries.

Question 7.
Read the first paragraph under the heading ‘The Happenings of 1922-1929’ and answer this, ‘Gandhiji called off the movement after the violence. How do you support it?
Answer:
The Non-Cooperation Movement held in February 1922 turned violent. A crowd of peasants set fire to a police station in Chauri Chaura. Twenty-two policemen were killed on that day. Realizing that the situation was going bad to worse, Gandhiji abruptly called off the movement.

Gandhiji followed non-violence and Satyagraha. Those were against this violence. Hence I support Gandhiji’s decision.

Question 8.
As a part of Non-Cooperation movement, what incidents took place in our state?
Answer:
Guntur district was at the centre of nationalist activity and the participation was very widespread including not only students, but also merchants and peasants in the villages. A highlight of the Non-Cooperation movement was the famous Chirala Perala movement. The government decided to convert this town into a municipality and forced high taxes. About 15,000 people of the town led by Duggirala Gopalakrishnayya refused to pay the taxes and migrated to a new settlement called Ramnagar and remained there for eleven months. There was a powerful movement of non-payment of land revenue by the peasants and mass resignations of village officers. People said, “Gandhiji’s swaraj is coming and we will not pay taxes to this government.”

Another major development was the Forest Satyagraha in Palnati taluka of Guntur district and also in Rayachoti taluka of Kadapa district. Peasants began sending herds of cattle into the forests without paying grazing fees to the forest department. In many villages of Palnadu, people declared Gandhi Raj and attacked police parties. People were convinced that the colonial rule was coming to an end and the forests would be back in the control of the village people. In the two taluqs, the forest administration had to virtually close down during the agitation period.
These were some of the incidents that took place in our state as a part of Non-Cooperation movement.

Question 2.
Find out more about Chirala Perala Movement and the Forest Satyagraha. Prepare a skit and enact it in the class. (Textbook Page No. 132)
Answer:

Ram Nagar Camp (Chirala I Perala)
Ramudu: Arey! Raja, why did you leave our village?
Raja: Not only myself, totally our Chirala / Perala villagers left our village.
Sekhar: What? I think this ¡s our fate, we have to leave our houses.
Yaswanth: That is not our fate. That is the fate of the Britishers. They tried to raise our tax Rs. 4000/- to Rs. 40,000/-. It is really a cruel action.
Ramudu: Leave it. Gandhiji gave us a beautiful idea.
Raja: Yes ra! His idea, the leadership of Duggirala Gopalakrishnayya are very well. Let us hope that these British will leave us soon.
Yaswanth: Are you right? Will they leave us?
Sekhar: Why do they leave us? They arrest us for our retort.
Raja: Let them do that. We will sacrifice our lives but we dont leave them.
All: Okay ra! Let us do like that.

Orey Britishoda ! Who is the person that asked us to pay pullari tax. We, the sons of this land, you, the dependent on this land. Why should we pay tax to you ? Is it just ? Is it Dharma? Do you think that the son of this Palnadu will do this – English dogs.

Orey Rutherford! This forest is our mother. Our own mother. Why should we pay you for our mother’s blessings.
Neeru pettava ? Naru vesava ? Kota kosava ? Kuppa nurchava ? Enduku kattalira sistu, Enduku kattalira neeku sistu.
Enduku, Enduku ?
Amma, Amma, if you kill me ….
Amma – Thousands of Hanumanthus will born ….
You, the Britishers, will be chased – chased and necked out of our country.
Amma-Amma Vande Mataram.
Vande Mataram.
Ammaaa
Bharatha Matha – Selav.
In the next birth also I will be your son – I will play in freedom.
Van … de … maa …. tar.. am.
…. (died)….

Question 3.
Why do you think were people against such laws during the freedom movement? (Textbook Page No. 180)
Answer: