Question 2.
Write an imaginary dialogue between the extremist and moderate activists of Indian National Congress in the context of their a) main demands; and b) mode of mobilisation.
Answer:

Moderates: We will request them to increase our representation in our ‘Imperial Ligislative Council.
Extremists: Why should we request them ? Choice is ours. We need not request them. We should chose them and send out from our country.
Moderates: Let us agree it. But upto that we should pass our time. Our people should be in authority for our safety. So we are requesting to conduct civil services in our country.
Extremists: We cannot have independence with the policy of pray, petition and protest. We cannot get the support of our people also. Let us unite together and fight. Let us take the problem to the public. Let us have their support. We will neck out the British soon.
Moderates: Okay. We change our way as peoples’ way. Let us join our hands to them and have our independence.
All: “Vande Mataram” “Vande Mataram”.

Question 3.
After reading this chapter, Mariamma thinks that the early phase of national movement was largely participated by educated Indians. And many of their ideas were of western origin. Would you agree with her? Give reasons.
Answer:
Yes. I agree with her.
Reasons:

Question 6.
How did different parts of the country and people respond to division of Bengal ?
Answer:
One major trigger for the movement was the proposal for partition of Bengal into East and West Bengal in 1903 by Lord Curzon. The Nationalists immediately saw this as a political act by the government to divide the Bengali people and also weaken the national movement. Even the ordinary people of Bengal were enraged by this act and took to streets to protest against it. There were massive protests, petitions and campaigns but they were not heeded to and the government partitioned Bengal in 1905. Several protest meetings were held and together they decided to boycotting English cloth and salt. There was a tremendous mass response to this call. Boycott and public burning of foreign cloth, picketing of shops selling foreign goods became common in remote corners of Bengal as well as in many important towns and cities throughout the country. Women refused to wear foreign bangles and use foreign utensils, washermen refused to wash foreign clothes and even priests declined offerings which contained foreign sugar. This spontaneous unity of diverse social groups was the basis of Indian nationalism. The early nationalists were successful in germinating this nationalism.
There was also a call for boycott of all government institutions like schools, colleges, courts etc. People set up Swadeshi schools and colleges and parallel courts in which they settled their mutual disputes. Thus the people responded to division of Bengal. 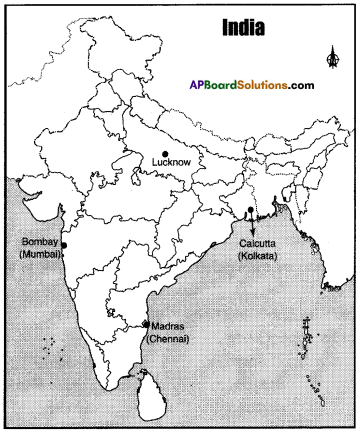 Question 8.
Locate the following in the World map: 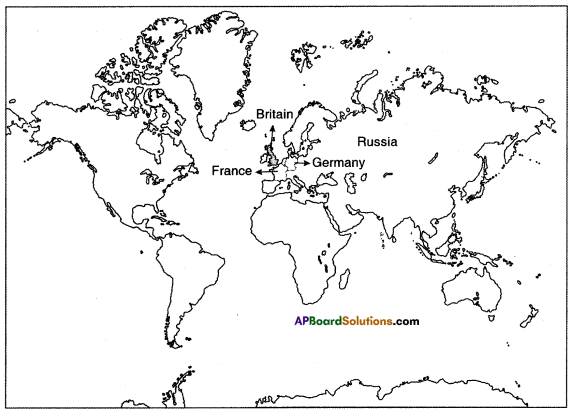 Question 9.
A few leaders like Gandhiji, Tilak, Subhash Chandra Bose, Bhagat Singh sacrificed their lives for the sake of our nation.
What would have happened, if they did not do so?
Answer:
The British would have plundered our nation’s wealth more and more. The people of our country would have been suffered as slaves under the British rule and India would have become a very poor country.

Question 10.
Are there any movements taken place in your region recently? Why?
Answer:
Recently ‘Jai Andhra’ movement took place in our region on the occasion of separating Telangana from Andhra Pradesh.
Reasons:

Question 1.
Collect photos of national leaders who participated in freedom struggle and prepare an album. Make a report on it and present in the class. 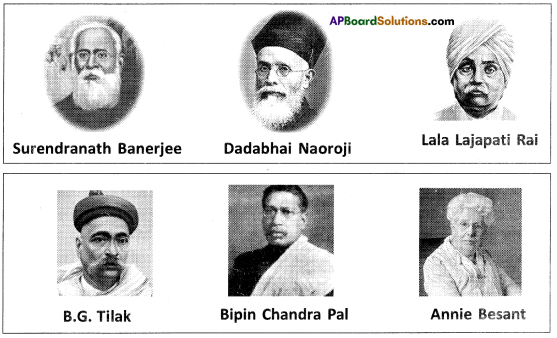 Question 1.
Imagine yourself as a student participating in a burning of foreign cloth. Describe what all would have happened on that day and your feelings at that time. (Textbook Page No. 126)
Answer:
My name is Sarath Chandra Chatterji. I was studying B.A. – I year in Calcutta College. Britishers occupied our country. They were trying to cut it into pieces as a cake. Till now we, the Indians, are in faith of Law of ‘Karma’. But we wanted to teach them a lesson. We planned to burn the foreign goods in our area.

It is our centre. The roads were clear upto 2 p.m. But all of sudden they were crowded. In the junction we lit a fire. We, all our neighbourhood, threw the foreign cloths and all the foreign goods into the fire. The fire brightened the sky. We gave our slogan ‘Vande Mataram’ and it sounded as ‘Om’. Our eyes were flooded with tears. The light of the fire revealed our attitude towards freedom to the world. Our anger frightened the British.

We decided to attain freedom even by sacrificing our lives.

Question 4.
Do you know of any association in your village or town which discusses problems faced by all the people (not just of one caste or community)? What do they discuss? What suggestions do they have for solving those problems? Discuss some examples in the class. (Textbook Page No. 122)
Answer:
Yes, we have one such association in our village. It is ‘Mytri Sangham’. It has its members from all the levels and categories. This association looks after the law and order in our village. They conduct discussions at the time of critical problems. They intimate the issues to police authorities in time. If the people fail to receive, protection or just, they would question the authorities also.

Their suggestions: If the enemy is strong and foolish, we should make him to listen to our words with our own tricks. Later we should gather our own majority. Then only we should fight with him.
e.g.: A tiger puts three steps backward when it starts its trial for hunt. That is the technique.

Question 5.
Find out more about the First World War and its impact on the lives of ordinary people. (Textbook Page No. 127)
Answer:
We can say that World War – I broke out between the capitalists and communists. It continued for nearly 5 years. All the nations with its people took part in it. More than 10,000,000 people lost their lives. 6,500,000 were injured. 6,000,000 were missed. Many nations suffered a lot. Whole world shivered with the feeling of insecurity.