Question 2.
What is the use of the stick in coal mines?
Answer:
The stick is used to check the blasted place in the mine by tapping.

Question 4.
Write about the quality of Barytes.
Answer:
Barytes available in the upper layers are of lower grade while those mined from depth are of higher grade. Quality is determined by the grain size of the stone.

Question 5.
How many kinds of minerals are there? What are they?
Answer:
Environmentalists differentiate minerals into two kinds of resources-renewable and non-renewable. Renewable resources are those which can be regenerated like wood.
Most minerals are non-renewable. There is only a limited amount of these available on the earth. If we finish them then there will not be any more of it. These are called non-renewable sources of energy, e.g.: gold, coal, petroleum.

Question 7.
Fili in the blanks:
1. Ten rings in Hollage indicates danger.
2. Narrow tunnel in mine is mine shaft.
3. Coal layer is called coal seam.
4. The coal drilling area is called face.
5. Coal is transported through conveyor belts.

Question 8.
Appreciate the mineral resources of Andhra Pradesh.
Answer:
Mineral Resources of Andhra Pradesh:
Andhra Pradesh is very rich in mineral resources. It is a large producer of granites of various colours, Kadapa stones, etc., used in buildings. It also produces limestone and dolomite used in cement industry. Northern districts have large coal deposits (Kothagudem in Godavari valley) while the Krishna Godavari basin has great potential for mineral oil and gas. AP is historically known for its famous diamond mines too and some of the largest diamonds in the world were found here.

Question 9.
What are the sensitivities in obtaining minerals from mines?
Answer:
Most of the mining practices result in disturbing the surface area – it can mean cutting down forests, destroying fields and habitations, creating large pits or mounds. Mines also need large amounts of water to wash the minerals. This results in polluting the nearby rivers and water sources. This usually means that older use of the land cannot be continued and farmers or tribal people have to leave the land. Even people who live nearby face problems created by mining. At the same time mining employs a large number of people who come to live in nearby areas and build new townships. It thus provides livelihood for nearly ten lakh people in India and over one lakh people in Andhra Pradesh. The work of miners is also very hazardous, as they are constantly exposed to accidents besides breathing in poisonous substances which cause long term health damage.

Question 10.
What aspects of regulations in the mining by the government do you agree with? And why?
Answer:
If the government introduced sophisticated methods and technology instead of giving the mines on lease, I feel better.
The reasons are:

So I support the government regulation only.

By Our Correspondent
WARANGAL, June 28: Singareni Collieries Company Limited (SCCL) has decided to adopt Open Cast Mining (OCM), to meet the demand for coal. The decision could render 20,000 people homeless and affect 200 villages. The mines will also affect an estimated 3,000 hectares of forests.

“If the mining underground produces 1,500 tonnes of coal a day, open cast mines pro-duce 10,000 tonnes per day and obviously at a much lesser cost,” said a senior SCCL official.

While that is so, the open cast mining will displace thousands of families, destroy scores of habitations and cause loss of livelihood to locals. According to the company official, the company will pay compensatory afforestation charges and develop forests on an equal amount of land where it has lopped off the jungles. It will pay Rs. 4.38 to Rs. 10.43 lakh per hectare, he said. The local people also complained that due to these mines which dig up the earth and create huge artificial hills of loose earth, rivers and streams are getting choked and ground water is getting polluted and there is acute scarcity of even drinking water.

2. What is meant by SCCL?
Answer:
Singareni Collieries Company Limited.

3. What will happen with this decision?
Answer:
The decision could render 20,000 people homeless and affect 200 villages. The mines will also affect an estimated 3,000 hectares of forests.

Question 15.
Look at the mineral map of Andhra Pradesh and fill the table. 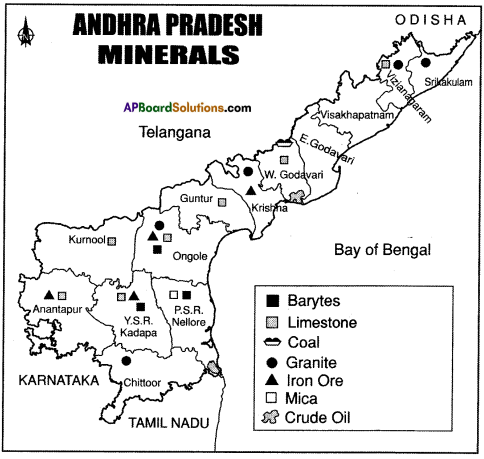