Question 1.
Compare the efforts of Narayana Guru and Jyotiba Phule. What similarities do you see between them?
Answer:

Question 2.
Recall the teachings of Buddha with regard to the caste system.
Answer:
Buddha preached that ‘All are equal’. He opposed caste and religious discriminations. He treated all his followers equal.

Question 3.
What are the similarities in the approaches of Gandhiji and Ambedkar towards dalits?
Answer:

Question 6.
What did Ambedkar want to achieve through the temple entry movement?
Answer:
Ambedkar wanted to say that ‘All are equal before God and everyone has rights on God”.

Question 8.
What problems do girls face in getting educated which boys do not face?
Answer:

Question 9.
To what extent has the treatment of widows changed today?
Answer:
We can say that the attitude of the society is changed. Widows are treated equally with other women. Their elders are only arranging remarriages for them.

Question 14.
How would the feeling that the dalits were the orginal inhabitants of Telangana and Andhra have helped in boosting the confidence of the dalits?
Answer:
The feeling would raise the confidence in dalits. This confidence would strengthen them in fighting against the discrimination. That led them to their success.

Question 16.
Locate the following in the given India Map. 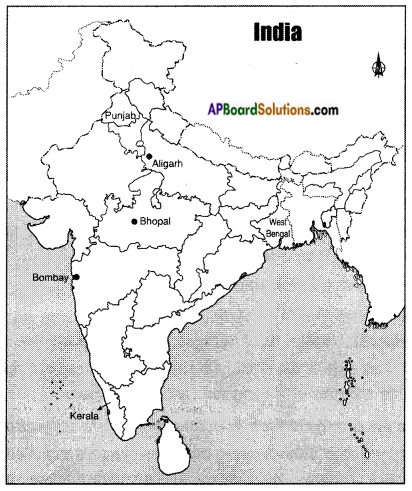