Question 1.
Write some of the inequalities prevalent in our society at the time of Independence.
Answer:

Question 2.
Write some of the discriminations prevalent in our society at the time of Independence.
Answer:

Question 3.
“A Constitution is a set of rule. ” Write any two rules.
Answer:

Question 7.
Why is it necessary for an elected parliament to make laws?
Answer:
Our constitution provides us a parliamentary form of government. The Parliament, consisting of representatives of the people makes laws. These laws are according to the needs and views of the citizens/people. Judiciary comments on this.

Question 9.
Some countries have a different structure, in which there is only a central government which makes laws for the entire country and governs all the provinces or states. Do you think such a system is suited for India?
Answer:
India is a land of many diversities. Different regions have different cultures. All these things should be taken into consideration to make laws. So such system is not suited for India.

Question 12.
Read the section ‘Dream and Promise’ again. Draw a table with statements that you consider as dream in the first column and promise in second column.
Answer:

Question 13.
Observe the following picture and write your comments. 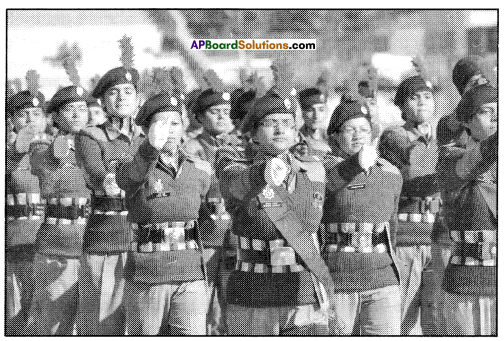 Answer:
This picture belongs to the celebrations of 26th January, the Republic Day. These are NCC students/cadets. They are marching in daylight without gender discrimination. Their faces are bright with self-reliance.

Question 14.
Match the names of the leaders with their photos. 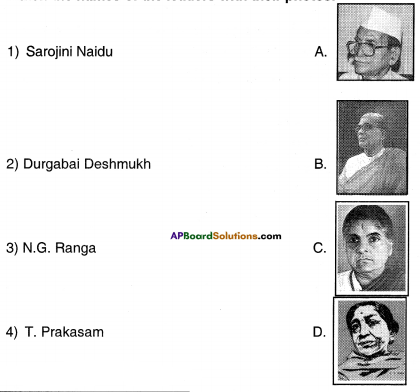 Question 15.
Which aspects of the dreams and promises can you identify in the words used in preamble? Create a chart to show the relationships.
Answer:

Question 16.
Read the following passage.
When India gained its freedom from colonial rule it was decided to put together basic principles for which we stood and principles and procedures by which our country would be ruled. These were written down in a book called the ‘Constitution of India’.

Now answer the following questions:
1. From whom did India gain freedom?
Answer:
India gained its freedom from colonial rule.

2. Where were the basic principles and procedures written?
Answer:
These were written in a book called The Indian Constitution’.

3. “A Constitution is a set of rule.” Write any two rules.
Answer:

4. Above all the Constitution sets before the country ———– the for which the has to strive.
Answer:
goals.

Some of you may have noticed a name missing from the sketches of the makers of the Constitution: Mahatma Gandhi. He was not a member of the Constituent Assembly. Yet there were many members who followed his vision. Writing in the magazine Young India in 1931, he had spelt out what he wanted the Constitution to do:
I shall strive for a Constitution which will release India from all thraldom and patronage… I shall work for an India in which the poorest shall feel that it is their country in whose making they have an effective voice; an India in which there shall be no high class and low class of people; an India in which all communities shall live in perfect harmony. There can be no room in such an India for the curse of untouchability or the curse of the intoxicating drinks and drugs. Women will enjoy the same rights as men… I shall be satisfied with nothing else. – Mahatma Gandhi
Now answer the following questions :
1. Whose name was missing from the sketches of the making of the Constitution?
Answer:
The sketch of Mahatma Gandhi.

2. Where was the dream written?
Answer:
In a magazine called ‘Young India’.

3. Whose dream was this?
Answer:
This was the dream of Mahatma Gandhiji.

Question 18.
Locate the following in the given World map. 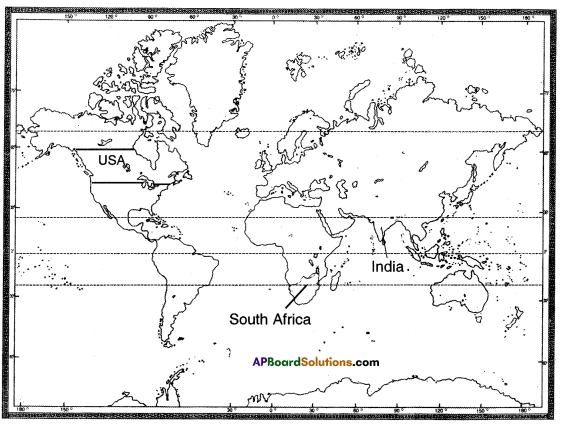