Question 1.
Do you think the free access to maps is a good thing?
Answer:
No, I do not think so. Any government has to maintain secrecy in access to maps. Otherwise, it helps the enemies. But at present satellite images reveal every place on the earth.

Question 2.
What is meant by the Relief feature?
Answer:
Relief feature means the high and low places on the surface of the earth.

Question 4.
What do you know about Marcopolo?
Answer:
Marcopolo was an Italian explorer. He explored China and Asia.

Question 5.
Why do you think maps are useful to armies in times of war?
Answer:
Maps were also in great demand during times of war as armies and airforces needed them.
They use strategy maps to illustrate an organization’s vision, mission, overarching strategies and key goals and initiatives.

Question 7.
What is aerial photography?
Answer:

Question 8.
What are satellite imagery?
Answer:
Satellite imageries are the photographs of the earth taken by the artificial satellites launched into the space. These are used in many ways: map making, planning, meteorology, forestry, warfare etc.

Question 9.
Write the difference between maps and photographs.
Answer:
Maps:
A map is used by geographers to show features that we consider important.
(Or)
A map actually is a model of a place giving those features that the map maker considers to be of importance.
Photographs:
A photograph may not be able to show you the features of a place like a map.

Question 11.
How can we read Thematic maps?
Answer:

Question 12.
What are main relief features on the earth?
Answer:

Question 14.
What are the uses of contour lines?
Answer:
Contour lines give an indication of the slope of the land as well as the elevation above sea level.

Question 15.
How did Mt. Everest get its name?
Answer:
In 1802 William Lambton began one of the most important geographical surveys in the world starting from Chennai in the south and culminating in the Himalayas to determine the length of longitude and also the heights of various places. This survey was completed by Sir George Everest. It is this survey that established that Mt. Everest is the highest peak in the world. It was named after George Everest.

Question 17.
Observe the given picture and write your comment.

Answer:
This was a model of the world according to the Bible. It is surrounded by oceans and is divided into three continents – Asia, Europe and Africa.
Of these, Asia was considered the largest and the most important as it had Jerusalem which was the birthplace of Jesus Christ. It is therefore also shown on the top. 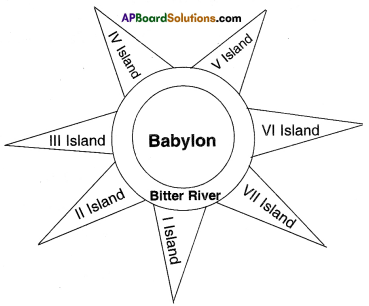 The Babylonian clay tablet was dated from the Persian period. It was flat and round. The inner circle had all the places they knew about. The city of Babylon was shown in the middle. Beyond the inner circle was ‘Bitter river, or ‘Salt water ocean’ in which were seven triangular islands.
Their thought, imagination, map making ability were really appreciable.

Question 23.
Write the biography of Al Idrisi. (in a few lines)
Answer:

Ash – Sharif Al Idrisi was born in 1099. He was a Muslim geographer, cartographer, Egyptologist and traveller. He lived in Sicily, at the Court of King Roger – II. He spent much of his early life travelling through North Africa and Spain.
Al Idrisi incorporated the knowledge of Africa, the Indian Ocean and the far east gathered by Islamic merchants and explorers and recorded on Islamic maps. He wrote a book ‘A Diversion for the Man Longing to Travel to Far Off Places’. The Tabula Rogeriana’ was drawn by him in 1154 for the Norman King Roger II of Sicily. He died in Sicily in 1165/1166.

5. Contours are lines on map joining places of same height measured from the sea level.

7. What are isolines?
Answer:
Isolines are the lines which join the places with some common features.

Question 25.
Observe the given information and answer the following questions.

2. What do you know about Marcopolo?
Answer:
Marcopolo was an Italian explorer. He explored China and Asia.

5. Who made his first voyage around the world?
Answer:
Ferdinand Magellan.

Question 26.
Locate the following on the given world map. 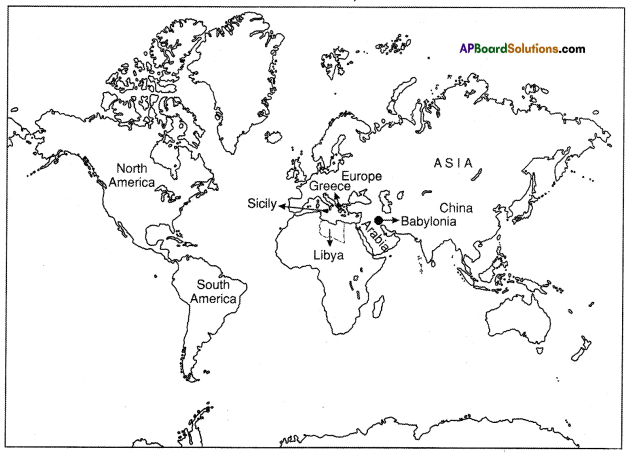 Question 27.
Observe the given map. 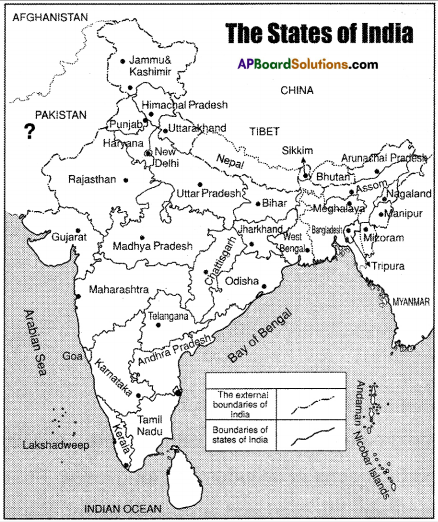 Now answer the following questions.
1. What are the islands in the Arabian sea
Answer:
Lakshadweep.

4. Name any state on east coast.
Answer:
Odisha, Andhra Pradesh.
(you can write any one)

5. Name any state on the west coast.
Answer:
Gujarat.

Question 28.
Observe the given picture and write down your opinion on Mercator projection. 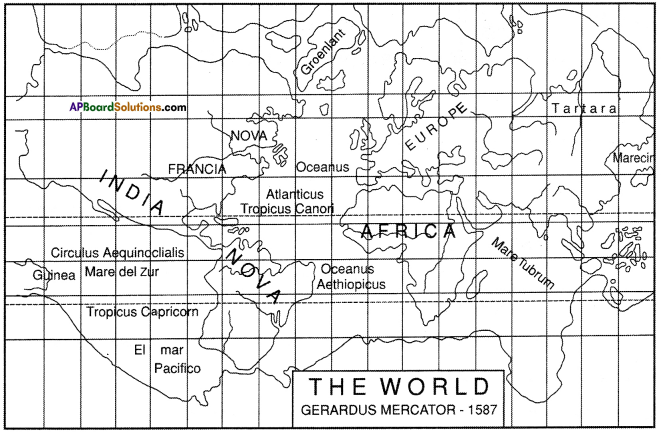