Question 1.
Which of the following cannot be charged easily by friction?
A) A Plastic scale
B) A copper rod
C) An inflated balloon
D) A Woollen cloth
E) Piece of wood
Answer:
(B) A copper rod

Question 3.
Identify ‘True’ or ‘False’ sentences among the following:
A) Like charges attract each other. (T/F)
B) A charged glass rod attract a charged plastic straw. (T/F)
C) Lightning conductor cannot protect a building from lightning. (T/F)
D) Earthquakes can be predicted in advance. (T/F)
Answer:
A) False
B) True
C) False
D) False

Question 9.
List three states in India where earthquakes are more likely to occur?
Answer:
The three states are

Question 10.
Does your habitation lie in earthquake prone area? Explain.
Answer:
Yes, my habitation lie in earthquake prone area because 1 am living in delta region of Krishna which is placed in seismic zone III. So it has chances of possibility of earthquake. (If the answering person is not living in Chittoor, YSR Kadapa, Nellore districts and Krishna and Godavari delta region then the answer is No.)

Question 14.
Give two examples of effects in your daily life caused by transfer of charges.
Answer:
Two examples in daily life:

Question 15.
Inflate two balloons and rub both of them with a cloth first and then with different material. Will they attract each other in both cases?
Answer:
No, they will not attract each other. Both will repel each other. The reason is both ballons rubbed with same material acquired same charge in the both the cases.

Question 18.
How do you relate the energy release during the collision of fault lines during earthquake to the atmospheric variation on the surface of the earth?
Answer:
An earthquake effects the atmosphere by creating amounts of debris and dust which will add to the air that we breathe. Earthquakes can also trigger volcanoes which will release tonnes of ashes and other debris into the atmosphere. This can sometime cause the blocking out of the sun, air pollution and are increased amount of carbon in the air.

Question 19.
Describe with the help of a diagram an instrument which can be used to detect a charged body.
Answer:
The instrument used to detect a charged body is electroscope.
Description of Electroscope:
Take an empty jam bottle. Take a piece of cardboard slightly bigger in size than the mouth of the bottle. Pierce a hole in it, so that a metal paper clip could be inserted. Open out paper clip as shown in the figure. Cut two strips of aluminium foil about 4 x 1 cm each and hang them on the paper clip. 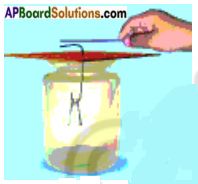 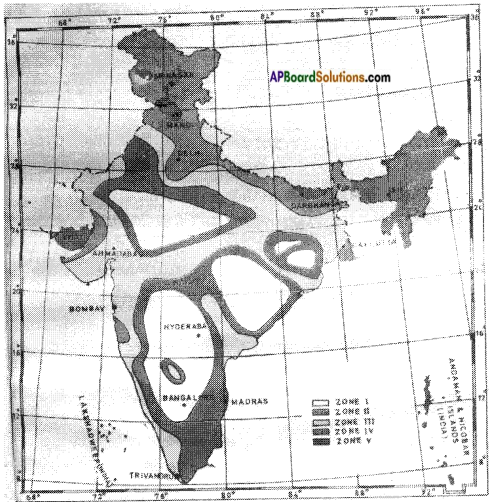 Question 21.
Prepare a model of seismograph.
Answer:
Preparation of model: 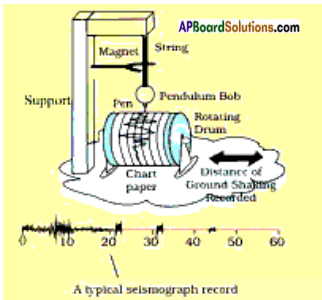 Question 23.
Suppose you are outside your home and an earthquake occurs. What precautions would you take to protect yourself?
Answer:

Question 24.
The weather department has predicted that a thunder storm is likely to occur at on a certain day. Suppose you have to go out on that day. Would you carry an umbrella? Explain.
Answer:
No, I would not carry umbrella during thunderstorm because the metallic rod attached to the umbrella attracts the charge developed in thunderstorm and charge may carry through umbrella and possibility of electric shock. So it is not a good idea to carry umbrella during lightning.

Question 25.
If earthquake occurs in your area what will you do?
Answer:

Question 26.
What are the measures you would take in your house when an earthquake occurs?
Answer: 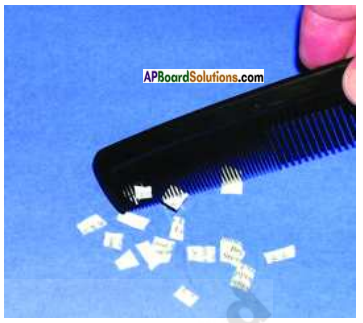 b) What is your observation. Take care that the rubbed end is not touched by your hand or with a metallic object.
Answer:
My observation is paper piece is attracted towards refill.
Now, take a comb and move it through dry hair a few times. Take the comb near small pieces of paper and check what happen.
The papers are attracted by comb.
Take an inflated balloon and rub it against your clothes. Bring the balloon close to small pieces of paper.
The paper pieces are attracted by balloon.
Take a drinking straw and rub it against a smooth wall or against your cloths, then bring it near pieces of paper.

c) What do you observe?
Answer:
The papers are not attracted by drinking straw.

d) Are they able to attract bits of paper after being rubbed?
Answer:
No, they are not attract bits of paper.
Repeat the activity by rubbing each one of the above mentioned objects (refill, comb, drinking straw, balloon) and use small pieces of dry leaf, husk, etc. as testing materials. Record your observation in table.

e) What can we infer from the above activity?
Answer:
When you rub material some material tend to attract pieces of paper.

h) Can we rub a comb against our palm and make it attract the paper bits?
Answer:
Yes, the paper bits are attracted to the palm due to friction charge is developed on the hand. 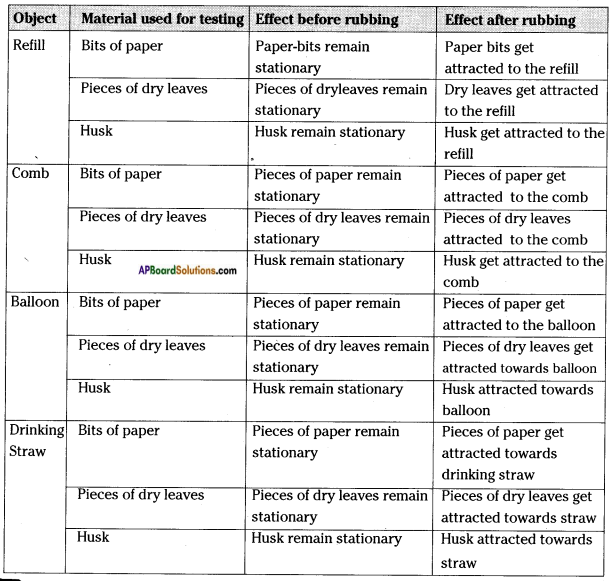 a) What do you conclude from above table?
Answer:
Some objects like refill, comb when rubbed with specific materials able to attract light objects like bits of paper. But some objects like steel spoon do not attract pieces of paper even after rubbing.

Question 2.
Understanding types of charges:
Inflate two balloons and hang them in such a way that they do not touch each other. Rub both the balloons with woollen cloth and release them. 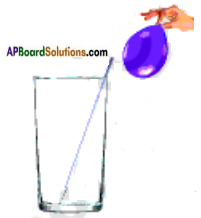 In the third part, objects made of different materials were brought near to each other after being rubbed with some material.
Let us summarise our observations carefully.

g) Does this activity remind you some of experiments that you have done in “Playing with Magnets” Chapter of class VI?
Answer:
Yes, we know that magnets attract objects made up of magnetic materials like iron, nickel, cobalt, etc.
We also know that unlike poles magnet attract each other and like poles repel each other.

h) Can we say that something similar is happening in above activities?
Answer:
Yes.

k) Can we also say that the charges of same kind repel each other, while charges of different kinds attract each other?
Answer:
Yes, it is convention to call the charge acquired by a glass rod when it is rubbed with silk cloth positive and charge acquired by a silk cloth is negative.
It is observed that when a charged glass rod is brought near a charged plastic straw which is rubbed with polythene sheet, there is attraction between the two.

m) Is your guess correct or wrong? Discuss with your teacher.
Answer:
My guess is correct because opposite charges attract each other which I confirmed by discussing with my teacher.

Question 3.
Conduct an experiment to find out the presence of charge on a body.
Make a small ball of thermocol. Collect thin silver foil used to decorate sweets.
Wrap this thin silver foil to cover the thermocol ball and suspend it from a stand with the help of thread as shown in figure. 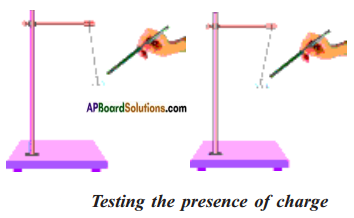 b) What do you observe?
Answer:
The suspended ball moves away from the glass rod.

c) What could be the reason for this change in movement of the ball?
Answer:
In the above activity when a charged body brought near an uncharged body it induces an opposite charge in it and hence it get attracted by the glass rod.
In the second case we have charged the thermocol by touching it with a charged glass rod. Hence when we brought the glass rod near the ball, as both of them have similar charge the ball gets repelled by the glass rod.
From the above activity we can conclude that attraction is not a sure test to know the presence of charge on a body.

Question 4.
Describe with the help of a diagram an instrument which can be used to detect a charged body.
Take an empty jam bottle. Take a piece of cardboard slightly bigger in size than the mouth of the bottle.
Pierce a hole in it so that a metal paper clip could be inserted.

e) Can you explain why the strips repel each other?
Answer:
The strips of aluminium foil receive the same charge from the charged refill through the paper clip. The strips carrying similar charges repel each other and hence they move apart.
This device can be used to test whether an object is carrying charge or not. This device is known as electroscope. In the above activity you can observe that electric charge can be transferred from a charged object to another through a metal conductor.
Touch the end of the paper clip gently with hand and you will find a change in the foil strips they move closer and come back to their original state.

Question 5.
Collecting information about the damages caused by earthquakes:
Ask your parents about the huge damages to life and property caused by these earthquakes. Collect a few pictures showing the damage caused by these earthquakes from newspapers and magazines of those days.
Prepare a short report on the suffering of the people during the earthquakes.
Answer:
Report: It caused damage to human life and property on a hugescale. Due to tsunami thousands of people died in the coastal areas of Andhra Pradesh and Tamilnadu. People lost their shelter.
a) What is an earthquake?
Answer:
An earthquake is a sudden shaking or trembling of earth lasting for a very short period of time. It is caused by a disturbance deep inside the earth’s crust.

b) What happens when it occurs?
Answer:
When it occurs it can cause damage to human life and property on a huge scale.

c) What can we do to minimize its (earthquake) effects?
Answer:
People living in seismic zones, where the earthquakes are more likely to occur, have to be specially prepared. The buildings in these zones should be designed so that they can with stand major tremors.
Steps to be taken in building construction:

Measures to be taken in a house when earthquake occurs.

Measures to be taken outdoors when earthquake occurs.

Question 6.
Locating the tsunami affected areas in the map:
Take an outline map of the world. Locate the eastern coast and Andaman and Nicobar Islands in India. Mark other countries around the Indian Ocean which could have suffered damage.
Collect accounts of the devastation caused by the tsunami in India from your parents, or other elders in the family or in the neighbourhood.
Answer: 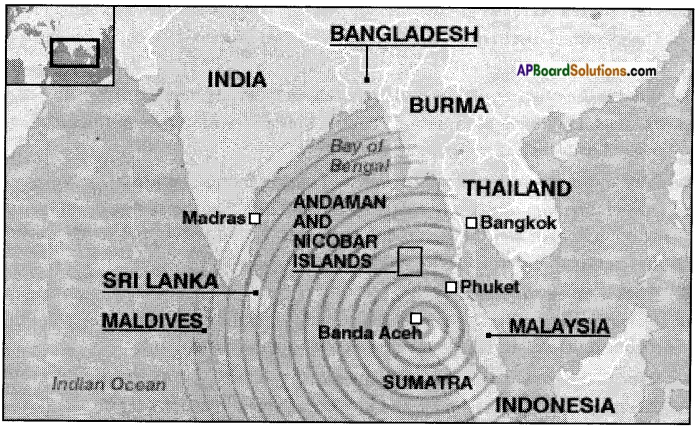 Devastation due to tsunami: