Question 3.
When and where does petroleum first used?
Answer:
More than 4000 years ago, asphalt (petroleum product) was used in the construction of walls and towers of Babylon. There are also records from ancient China about shallow wells being dug to get petroleum.

Question 4.
What did our ancestors do with petroleum?
Answer:
They mainly used petroleum for their wooden boats and waterproof, as a fuel for lamps and in some traditional remedies.

Question 5.
What is the basic difference between coal and charcoal?
Answer:
Coal used in factories is mined from the earth’s crust. The charcoal is obtained from firewood.

Question 7.
What is carbonisation?
Answer:
The slow process of conversion of dead vegetation into coal is called carbonisation.

Question 9.
What is coke and what are its uses?
Answer:
Coke is a tough, porous and black substance. It is an almost pure form of carbon. Uses:

Question 11.
What are alternatives to natural gas? Why do not we are using them?
Answer:
The alternatives for natural gas are coal bed methane and gas hydrates. These are not in commercial production phase due to lack in proper technology.

Question 1.
How do you obtain various materials we are using in our daily life?
Answer:

Question 2.
What is biodiesel? How would you prepare biodiesel? What is its use?
Answer:
Biodiesel is one of the biofuel. Which is not toxic and renewable. It is made from the biological ingredients instead of petroleum or crude oil. Biodiesel usually made from the plant oils or animal fat through a series of chemical reactions.
It is used in diesel engines.

Question 3.
What is coal? Explain the process of formation of coal.
Answer:
Coal is hard and black coloured substance obtained from mines.

The plants in large and dense forests in low lying wet lands got buried under the soil due to natural processes like floods and earthquakes. As more soil deposited over them, the organic matter was compressed. The temperature also rose. As the organic matter sank deeper and deeper, under high temperature and high pressure, the dead plants slowly converted to coal.

Question 4.
What is coal tar and what are its uses?
Answer:
Coal tar: It is a black coloured thick liquid with an unpleasant smell. It is a mixture of about 200 substances.
Uses:
Products obtained from the coal tar are used as starting material for various substances like synthetic dyes, drugs, explosives, perfumes, plastics, paints and roofing material. Naphthaleine balls obtained from coal tar used to repel moths and other insects.

Question 5.
What is coal gas and what are its uses?
Answer:
Coal gas is a gas obtained during the processing of coal to get coke.
Uses:

Question 6.
What are petrochemicals? What are the uses of petrochemicals?
Answer: The useful substances which are obtained from petroleum and natural gas are called petrochemicals.
Uses:
They are used in the manufacture of detergents, synthetic fibres (polyester, nylon, acrylic) polythene, etc.

Question 8.
Why are coal and petroleum so versatile?
Answer:
Coal consists of mainly carbon while petroleum consists of mixture of compounds called hydrocarbons. These compounds make good starting materials for other compounds based on carbon. Carbon is very versatile and is basis for most of the materials.

Question 9.
Why does the price of petrol go up all the time?
Answer:
The price of anything depends on how much of it is available and how essential it is. Both coal and petroleum are exhaustible resources but we need them, both as fuel and as starting material for synthesising new compounds. Since supply is limited and becoming more expensive as the demand for petrol increase.

Question 11.
Ramu told Rahim that solar energy is inexhaustible resource then what are the questions raised in the mind of Rahim about solar energy?
Answer:

Question 13.
What will happen if fossil fuels like coal and petroleum are completely exhausted?
Answer:

Question 14.
Suggest some alternative ways to save the fuel resources. (Or)
What actions are required to meet the future energy needs?
Answer:

Question 15.
Burning fuels releases carbon dioxide , a green house gas, which causes climate changes and leads to global warming. Collect information about this through newspapers, magazines, etc. and prepare report.
Answer:
i) Drastic increase in the emission of CO2 within last 30 years caused by burning of fossil fuels has been identified as the major reason for the change of temperature in atmosphere.
ii) Carbon dioxide in the atmosphere traps the reflect sunlight and re-emitt towards earth which is causing increase of earth temperature what we call as global warming. 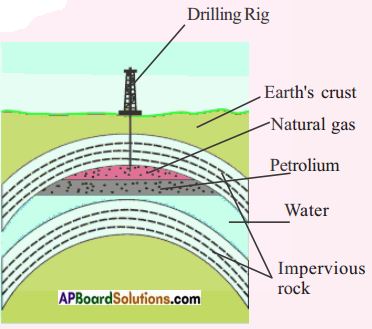 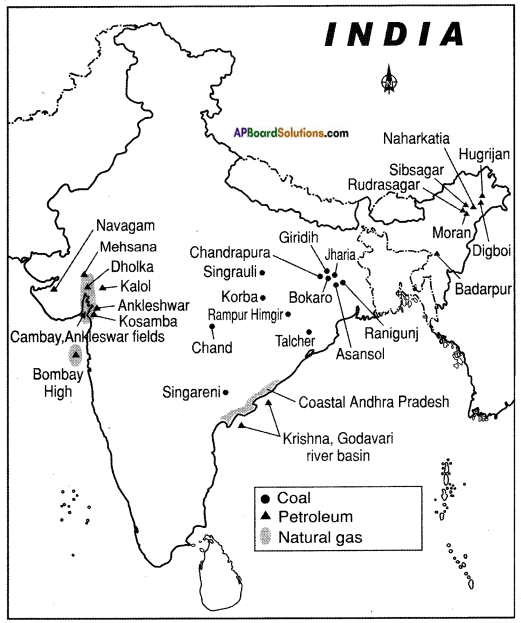 Question 1.
Write any two uses of petrochemicals in our daily life.
Answer:
Uses: They are used in the manufacture of detergents, synthetic fibres (polyester, nylon, acrylic) polythene, etc.

Question 2.
It is necessary to save the energy resources like petroleum and natural gas. Write a slogan about this to create awareness among people.
Answer:

Question 5.
Assume that you are a driver, what measures do you take to save petrol?
Answer:
Engine must be stopped in the traffic signals or in heavy traffic.