Question 1.
What is force ? What is its S.I. unit?
Answer:
The push or pull of an object is called force. Its S.I. unit is Newton.

Question 5.
What is friction?
Answer:
The resistance to the movement of a body over the surface of another body is called friction.

Question 6.
Define normal force.
Answer:
The force that a solid surface exerts on any object in the normal direction is called normal force.

Question 7.
What is a magnetic force?
Answer:
The force exerted by a magnet on another magnet.

Question 10.
What is magnetic field?
Answer:
The space around the magnet where its influence can be detected is called magnetic field.

Question 11.
What is a net force?
Answer:
The algebraic sum of the forces acting on a body is known as net force.

Question 13.
A blacksmith hammers a hot piece of iron while making a tool. How does the force due to hammering affect the piece of iron?
Answer:
It changes the shape of iron.

Question 14.
A rocket has been fired upwards to launch a satellite in its orbit. Name the two forces acting on the rocket immediately after leaving the launching pad?
Answer:

Question 16.
What is tension?
Answer:
When we stretch a rope or a string the tightness of rope or string is called tension. Tension is a contact force.

Question 3.
Observe the situations of electrostatic forces in your daily life and prepare a report.
Answer:

Question 4.
Find the net force acting on a body shown in the figure. And draw the direction of net force. (Length of the arrow shows the magnitude of the force and direction also.)
Answer:

Question 5.
Give two daily life examples each of situations in which you push or pull to change the state of motion of object.
Answer:
Push:

Question 6.
Give two examples of situations in which applied force causes a change in the shape of an object.
Answer:

Question 11.
How does an applied force change the speed of an object ?
Answer:

Question 12.
Give three examples of force exerted by muscles in our body.
Answer:

Question 16.
How many types of forces are there and what are they? Give examples for each.
Answer:
Forces are two types:

Question 17.
What is pressure ? What is its unit?
Answer:
The force acting perpendicularly on a unit area of surface is called pressure.
Pressure = Force/Area
Its unit in S.I. system is Newton / metre or N/m .

Question 18.
What is the influence of Sir Isaac Newton on students?
Answer:

Question 1.
Design and conduct experiment to test few ways how friction may be reduced.
Answer:
Friction is due to the roughness of surfaces. It can be reduced by the following methods.

Experiment: The rusted pulley makes a rattling noise. Apply some oil in between the wheel and axle. The sound is reduced and now it works smoothly. 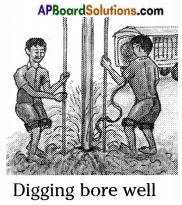 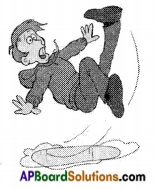 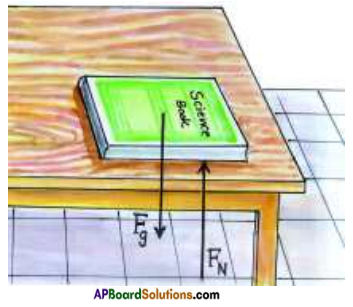 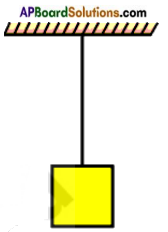 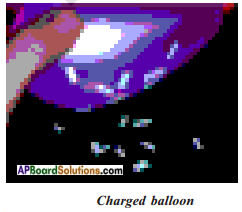 Report: Forces are two types based on contact or non-contact between objects.

Question 3.
When you push a heavy object, it doesn’t move. Explain the reason in terms of net force.
Answer:
There are four forces acting on the heavy table. They are normal force (upwards), gravitational force (downwards), push and friction (opposite to push).

Question 4.
Some forces are acting without any contact of surfaces. Explain.
Answer:
Some forces like magnetic force, electrostatic force and gravitational force act on other bodies without any contact of surfaces. This property is called the field force.
As far as magnetic force concern, the magnets are surrounded by the magnetic lines of force which provide the magnets attractive and repelling forces. The same poles repel and the different poles attract.
The electrostatic forces are exerted by a charged body on another charged or uncharged body. The charged body induces an opposite charge on the uncharged body and it gets attracted by the body. Here, the two bodies are at distance before the electrostatic forces are exerted.
The earth attracts everybody even though they are at some distance. This force is called gravitational force or weight of the body. It varies at different places.

Question 5.
In the following situations identify the agent exerting the force and the object on which its acts. State the effect of force in each case.
a) A batsman hitting a cricket ball
b) Pressing a lump of dough
c) Taking out paste from a tooth paste
d) A horse pulling a cart
Answer:

Question 2.
Find the net force from the following diagrams.

Question 3.
If you bring a rubbed balloon near the pieces of paper, what do you observe ?
Answer:
Rubber balloon attracts pieces of paper. It is electrostatic force.

Question 4.
From the above diagram, calculate the net force acting on a body.

Question 7.
Define contact force and force at a distance, give two examples for each type of force.
Answer:
Contact force: The force results when there is a direct physical contact between two interacting objects is called contacting force.
Example: Muscular force, Frictional force, Normal force, Tension.
Field force or Force at a distance : The force which occurs without any physical contact between two objects is known as force at a distance or field force.
Example : Magnetic force, Electrostatic force, Gravitational force.