Observe the pictures and discuss the questions that follow. 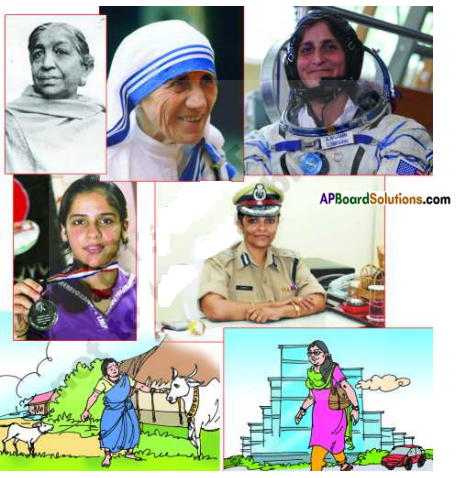 Question 1.
Who are these people? What do you know about them?
Answer:
In the first picture we see Sarojini Naidu. She is also known as The Nightingale of India’. She was a poet and an Indian independence activist. In the second picture we see Mother Teresa. She was an ethnic Albanian, Indian Roman Catholic nun. She founded the Missionaries of Charity and served the needy. In the third picture we see Sunita Williams. She is an American astronaut. Her parental ancestry originates in Gujarat in India. In the fourth picture we see Saina Nehwal. She is an Indian badminton player who attained a career best ranking of 2 in December 2010. The fifth is the picture of Bharatha Das, Inspector of General of Crime Branch, Kerala, the first IG of Police of the Kerala Armed Police Battalions. In the sixth picture we see a village woman and in the last picture we see a city woman.

Question 2.
‘Education leads to empowerment of women? Do you agree or disagree? Give reasons.
Answer:
Yes, I agree with the statement. Women education plays a key role in the social and economic development of the country. Educating a woman uplifts her life as well as the quality of her life
and her entire family. It is a fact that any educated woman will definitely support the education of her children especially a girl child and provide a better guidance to her children. An educated woman will easily imbibe an independent and progressive outlook in her children. More importantly, an educated woman in a society like India will assist in reducing the infant mortality rate and control the blossoming of the population. Hence we can say, education leads to empowerment of women.

I. Tick (✓) the statements that are true.

Question 1.
“The moment I see letters can’t …….. contain my excitement” Why does the narrator get excited?
Answer:
When the narrator gets the letters and reads them she thinks that it is almost as if she is face to face with her near and dear ones and they are speaking affectionately to her. When she reads the letters the exhaustion of office work disappears and her heart grows light. The sight of letters gives her the energy and enthusiasm and then she discharges her household duties very effectively. So, the narrator gets excited whenever she receives letters.

Question 2.
What change did the narrator observe in her father’s attitude towards education over a decade?
Answer:
The narrator’s father felt in the beginning that education for girls was of no use. Those were the days when people thought it was enough if a girl was able to keep the washerman’s accounts. So, Nannagaru did not let Akkayya study after class Five. A decade later, when Ammalu was born, there was not much debate as to whether a girl should have education or not. Ammalu was lucky that her father changed with the times. He didn’t even hesitate to send her to college.

Question 3.
Why was Akkayya determined to send her daughter to college?
Answer:
Akkayya knew very well how she had suffered as she was not educated and not an employee. She didn’t have financial independence. She had to depend on her husband even for a few paise worth of karivepaku. She didn’t like to keep a girl at home without educating her. She thought that a woman would come to nothing if she didn’t have a degree and she would have to live under her husband’s thumb, like a scorpion under a slipper without it. So, she determined to send her daughter to college.

‘Bonsai Life’ by Abburi Chayadevi is a plea for educating women, thereby freeing them from their ‘Bonsai Life’. Ammalu is a wel! educated woman who works in Delhi. Her sister, on the other hand, is not educated as Ammalu. Their father did not let Akkayya study after class Five. He felt that it was enough if a girl was able to keep the washerman’s accounts. But Ammalu was lucky that her father changed with the times and allowed her to send her to college. Ammalu completed her education and married a job holder. Later she took up one well. Because Akkayya was not educated, she was married to a man from the village. Akkayya’s husband chose agriculture as his profession and settled down in the village to cultivate his land.
Ammalu is lazy about writing letters and loves to receive one from some place or the other, every day. She gets excited when she receives one. One day she received an unexpected letter from her Akkayya. Akkayya didn’t usually write a letter. So Ammalu thought that there might be a reason. She opened the letter and started reading. Akkayya wrote that she and her husband (Baavagaru) were visiting them soon as they wished to visit Kasi and Haridwar. Both Ammaiu and her husband were excited to know about their visit. For the first time Akkayya and Baavagaru were visiting their home since their marriage. Akkayya brought cucumber, drumsticks, appadams, vadiyams and coconuts which were all liked by Ammalu’s husband very much. As Ammalu was always busy with her work, she usually could not find time to prepare the things such as appadams, vadiyams etc. When she expressed the same, her Akkayya consoled her that she didn’t know how she was able to manage work at home and in the office. Ammalu was very unhappy with her job. Sometimes, she felt like giving it up. But Akkayya’s thoughts were different. She felt that a job holder didn’t have to beg anyone for anything and Ammalu was able to lead a dignified life because of her job only. Akkayya yearned for the financial independence of a working woman whereas Ammalu longed for happy life of a house wife. Akkayya’s daughter was in her final year at school. She was determined to send her to college. She felt if a woman didn’t have a degree, she would come to nothing.

mutter (v): complain about something privately

enthusiasm (n): a strong feeling of excitement and interest in something

sip (n): a very small amount of a drink that one takes into one’s mouth

apprehensive (adj): worried or frightened that something unpleasant may happen

hesitate (v): to slow to speak or act because one feels uncertain or nervous

accustomed (u): familiar with something and accepting it as normal or usual

consoled (v): gave comfort or sympathy to somebody who is unhappy the grass is greener

on the otherside (idiom): It is said about people who never seem happy with what they have and always think that other people have a better situation than they have