Look at the pictures given and answer the questions that follow. 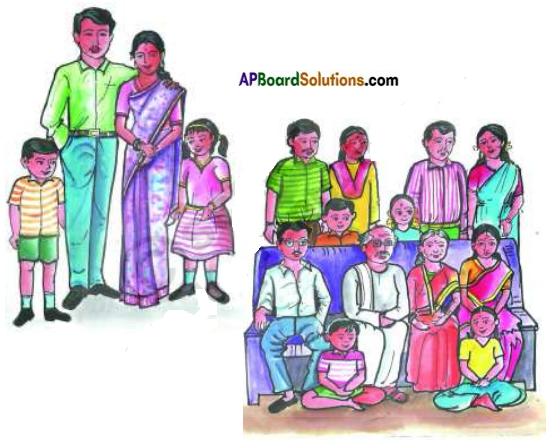 Question 1.
Why didn’t the mother recognise Gopi and how did he feel?
Answer:
Gopi’s mother did not recognize him as she might have lost her memory. He didn’t visit her very often. He was very disappointed at that. He tried to convience her that he was Gopi, her son but of no use.

I. Fill in the blanks with the most appropriate words from the box. Remember, the box has some extra words.

II. Tick (✓) the words that are similar in meaning to the underlined words.

1. His mother made a futile attempt to get up.
a. barren
b. limited
c. useless
d. empty
Answer:
c. useless

I. Look at the following sentences from the text and observe the underlined part in each sentence.

Here the word ‘man’ is important and all other words add more information to that word. So it is called a Noun Phrase.
Identify some more noun phrases from the story and write them below.
Answer:
1) The tattered blanket
2) A thin bath towel
3) His office jeep
4) Her wrinkled cheeks
5) A ball of knotted yarn

Complete the sentences with noun phrases using the words given in brackets.

Look at the following sentences and observe the underlined part in each sentence.

I. Read the following paragraph, taken from the story.

Delhi is too expensive. You know I have four children to look after now. I can’t make both ends meet with my salary. And one has to keep up one’s status. It will be a great help if I can raise some money by selling my share of the family property. I came to talk it over with you.
Now, write a paragraph on how to keep up family ties despite economic pressures (You may use the hints given below).

Answer:
People lead a very busy life in the present society. They work like machines. They even don’t find time to sit together. They forget their families. They don’t have any enjoyment. Because of the economic pressures they have to earn more and more money. They don’t give any importance to the human relations. Everyone tries to keep up his/her status. They don’t show any love and affection on their family members. The younger ones forget the selfless service rendered by their parents. They don’t have any feelings to them. They forget the sacrifice made by their par¬ents in the process of giving them good education, providing them good facilities and giving them good lives. In the hunting of money, they don’t find time to spend with their family members. They neglect their parents. The old people are equal to the little children. They need help, service, money, etc. from their offspring. So, the younger ones must provide them to their parents. Despite their economic pressures, they must find some time to spend with their parents. They should remember that one day they too will become old. If they don’t show any love and affection, they too will have to face the same situation. Though the younger ones are busy with their work, they should maintain family ties and show the right path to the next generations.

Listen to your teacher making an announcement and answer the following questions.

An Announcement on the Radio

Prashanth, a thirteen year old boy has been missing since last Sunday. The boy is in blue trousers and pink T-shirt. He can speak Telugu, Hindi and English. He has fair complexion. He is fond of movies. His parents are much worried about him. Whoever finds Prashanth will be rewarded. You may contact the Sub- Inspector of Police, Vidya Nagar, Thiruvananthapuram. (Mobile No. 99xxxxxx00)

Question 2.
What are the features of Prashanth?
Answer:
Prashanth is a thirteen year old boy. He is in blue trousers and pink T-shirt. He can speak Telugu, Hindi and English. He has fair complexion. He is fond of movies.

Question 4.
Think of some announcement you may make or listen at school.
Answer:
As you are aware, we are going to celebrate the Children’s Day celebrations in our school on the 14th of this month. We are going to organize a number of cultural programmes on the occasion. So, I would like to request the students who are interested to give their names to the SPL. The selected events are : Dances, Skits, Songs and Plays.

Is yours a nuclear or joint family?
Now write a paragraph describing the types of families using the information given in the above tree diagram.
Write which type of family you prefer and why.
Answer:
Ours is a nuclear family. But I prefer to be a member of a joint family. There are two types of families. They are (i) Joint family and (ii) Nuclear family. A joint family consists of father, mother, their children and their families. A nuclear family consists of father, mother and their children. I really can’t see any disadvantages with a joint family. In every sense it is a convenient arrangement for everyone – morally, emotionally, mentally, financially, etc. With everyone putting his or her efforts, joint family system benefits everyone. The children are well taken care of. They learn to give and take, to be patient, cooperative, tolerant and to adjust with the other family members in a joint family. The joint family gives security, health and prosperity to everyone of its members. The joint family system is one that could help us to live a less stressful life as there are a lot of people around to help us and to share joys and sorrows. The eleders handle the financial matters. So there is no stress on the younger ones. The elders show the right path to younger ones. The younger ones develop the virtues like co-operation, sympathy, sacrifice, selfless ser­vice, obedience, etc. in a joint family. We find love and affection among the members of a joint family. Hence I prefer the joint family system.

The Tattered Blanket Summary in English

Gopi was a government officer living in Delhi. He married Vimala. district collector Nambiar’s eldest daughter. They had four children. Gopi’s old mother was living in the countryside along with her eldest daughter Kamala, a widow. After attending a meeting in Thiruvananthapuram, he dropped in on his way back. His mother saw him getting down at the gate and asked Kamala to see who he was. Kamala walked slowly to the gate reluctantly. She recognised Gopi and asked him unpleasantly why he made a sudden unexpected visit. But Amma did not recognize him. Gopi tried to tell her that he was her son. Kamala told Gopi that that Amma was often like that those days. She didn’t recognize anybody. When Amma asked Kamala if her son (Gopi) had sent a letter, Kamala told her everything was fine with him. But Gopi didn’t write any letter to her. When Kamala told Gopi all these things, he replied that he was on his toes always as he got promotion the previous year. So he didn’t get any time to write letters. Again Amma asked who he was. Gopi told her that he was her son Gopi and he had come from Delhi. She even forgot his wife’s name. She used to think that Gopi wrote letters to him every day. So she asked Kamala if he wrote a letter that day. Gopi kept his briefcase on the thinna, opened it and pulled out his contents such as clothes, files, a shaving set, etc. Amma told Gopi that her son Gopi was a government officer in Delhi and had Kesariyogam. She asked him to send her a new red blanket to protect herself from a cold mist. Her old blanket, which was brought by Gopi when he was studying in Madras, was all tattered. Actually Gopi didn’t come to the village too see her Amma. He didn’t have any affection and love towards his Amma. He gave more importance to status. He wanted to raise some money by selling his share of the family property. He came to talk it over with his sister. Kamala knew that he would never come there anymore after selling his land. When she told Gopi the same, he answered that he would come when he got time. He said that Amma couldn’t remember who he was. Actually it was he who didn’t remember his Amma.

Kamala Das (1932-2009) is the daughter of the famous Malayalam poet- Balamani Amma and V.M. Nair. She is an internationally known poet, short story writer and novelist who writes effortlessly both in English and Malayalam. She has received many awards for her literary work. Some of them are Asian Poetry Prize, Kent Award for English Writing from Asian Countries, Asian World Prize, Sahitya Academy Award and Vayalar Rama Varma Sahitya Award.

thinna (n): sit out (elevated place on the verandas)

huddled (v): held arms and legs close because of fear or cold.

reluctantly (adv): not willing to do something

peer (v): to look closely or carefully at something or somebody

grating (adj): unpleasant to Listen to

nod (v) : move one’s head up and down to show agreement

make both ends meet (idiom): to earn just enough money to be able to buy the things you need

look after (phr. v): to take care of somebody/something