b) Gametes and Zygote:

Question 3.
Why do fish and frog lay more number of eggs whereas cow and human beings usually give birth to only one at a time?
Answer:

Question 4.
Can animals produce offsprings even without formation of zygotes, how? Explain with suitables example.
Answer:

Question 5.
How can you identify the animal is viviparous or oviparous?
Answer:

b) I am a gamete that has a tail and travel to fuse with female gametes.
Answer:
Male garnets or sperm or spermatozoa:
The structure of sperm has a head, a middle piece and a tail.

c) I am a fully developed embryo inside a mother’s body.
Answer:
Offspring or baby:
The zygote divides repeatedly to give rise a ball of cells. The cells then begin to form groups that develop into tissues and organs in the body. This developing structure is termed as an Embryo.
The embryo gets embedded in the wall of the uterus for further development. It develops in the uterus. It gradually develops body parts such as hands, legs, head, eyes, ears etc. From 3 months (12 weeks) of pregnancy the embryo is called FOETUS – After the completion of this period (about 270 – 280 days) a baby (offspring) is born. This is called gestation period.

Question 7.
State the reason why most of the terrestrial animals’, fertilization takes place internally.
Answer:

Question 8.
Observe the following figures and write the functions of them.

Answer:
a) Testes:
Testes are the male reproductive organs and produce male gametes known as sperms or spermatozoa. Testes are egg shaped. It is connected with a pair of seminal ducts through which sperms travel and ejaculate out with the help of penis.

b) Female Reproductive system. Oviduct or fallopian tube connected with ovary. Female reproductive system contains a pair ovaries, oviducts and also called fallopian tubes and uterus.
The ovary produces female gametes called ova or eggs. In human beings, a single matured egg is released into the oviduct by one of the ovaries every month.

The ovum which is a single cell released from ovary and enters into a tube called Fallopian Tube. The end of the tube is like a funnel with several finger like structures and is also ciliated. The movement of cilia help the movement of ovum through the fallopian tube into uterus.
c) Sperm:
Human sperms are minute, microscopic and motile they have a oval head, a neck, a middle piece and a long tail.
Head consists of a large haploid nucleus. Acrosome is present in the head, which helps in fertilization.

The neck is short middle piece has several mitochondria which produce energy required for the movements of sperms. Tail piece helps in the swimming of sperm to reach the ovum during fertilization.
d) Fusion of ovum and sperm:
(Fertilization) Fertilization is of internal type. Sperm reaches the ovum in the fallopian tube. Sperm nucleus enters the ovum which is haploid.
When sperm enters the ovum the membranes of ovum becomes thicken. So that another sperm can not penetrate the ovum. This prevents double fertilization of the ovum. During fertilization, the sperm and the ovum fuse to form a zygote. 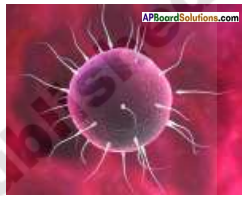 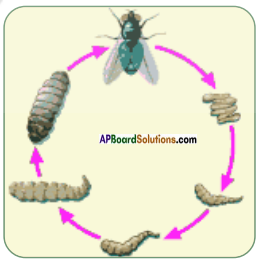 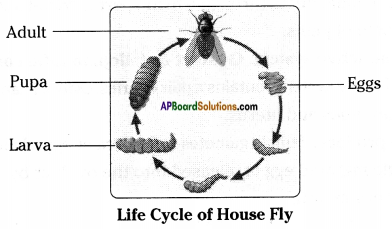 b) Explain the process of metamorphosis in housefly by taking help from in the given diagram.

Answer:
Metamorphosis in the house fly: A female housefly at a time lays about 120 to 160 eggs. The eggs are laid in garbage, on dung heaps, or on a decaying animal and vegetable matter. The life history consists of 1) egg 2) larva 3) pupa and 4) adult stages. Egg: The egg is white and cylindrical on one side. It has two ribbon like longitudinal thickenings. They hatch in about 24 hours into larva.
Larva: The larva is known as a Maggot. It is white in colour. The baby of the larva has 13 segments. It has a mouth and feeds on organic matter.
Pupa: The fully grown larva moves to a dry place in the dung and changes to a pupa. The pupa is dark brown and barrel shaped. In a week, the pupa changes into an adult or imago.
Houseflies spread, germs that cause diseases like typhoid, cholera, amoebic dysentery, tuberculosis. Our food should be kept covered from houseflies. The surroundings should be clean without garbage and dung heaps. Insecticides can be used to kill the house flies.

Question 11.
What would happen if all the organisms stop the process of reproduction?
Answer:

Question 12.
Kavita found a tadpole in a pond. She collected it carefully and put it in an aquarium supposing it as a fish. After some days what did she find and why?
Answer:

Question 13.
Collect information from your library or from other sources like internet and discuss the life cycle of Honeybees in the symposium at your school.
Answer:
In the life cycle of butterfly there are four stages.

The cycle of changes that takes place from egg to adult is called metamorphosis. 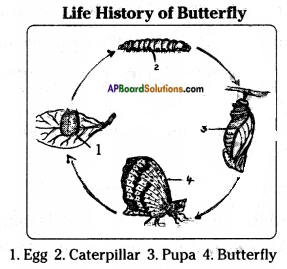 1) Egg: The egg is the first stage in the butterfly. They are very small and round. The female butterfly lays eggs on or near the plants.
2) Larva: The larva hatches from the egg. Butterfly larva are usually called Caterpillar. Caterpillars spend most of their time eating. Butterfly do all their growing when they are caterpillars, and food gives them the energy and body building materials they need. A caterpillar’s exoskeleton can’t stretch or grow, so the caterpillar sheds its skin or molts, several times as it grows.
3) Pupa: When the caterpillar has finished growing, it forms from the outside, the pupa looks as if it’s resting. But inside, every part of the caterpillar is changing. Most of it’s organs and other body parts like head, thorax and abdomen, 3 pairs of legs, 2 pairs of wings, a pair of compound eyes, the antennae, a proboscis etc. are formed. Butterfly pupa are called chrysalises.
4) Adult: When the pupa has finished changing, it molts one last time and emerges as an adult butterfly. The adult emerges with its wings folded up against its body. The adult is the stage when butterfly mate the reproduce. Females lay their eggs on plants or other surfaces and the cycle starts all over again. 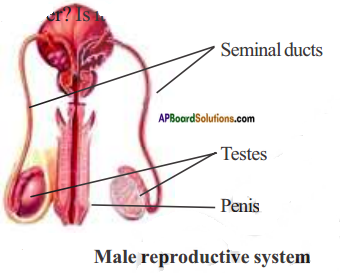 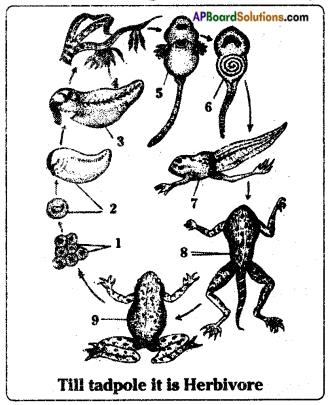 Question 16.
How would you appreciate Ritwik’s work when he kept back the pigeon squab in the ventilator? If you were in Ritwik’s place what would you do?
Answer:

Note: This project work needs patience and carefulness. Teachers should be cautious while doing this project. Care should be taken at the time of collection of eggs of frogs. From a nearby pond or slow flowing streams. If eggs are not available, you need not to worry. You can start your project after collecting Tadpoles.
To conduct this project you require:

Answer:
Step -1: Go to a nearby pond or a slow flowing stream where usually sewage stagnates during rainy season. Collect few eggs of a frog with the help of wide mouthed bottle as shown in the figure. While collecting eggs, take care that the clusters of eggs are not disturbed and isolated. 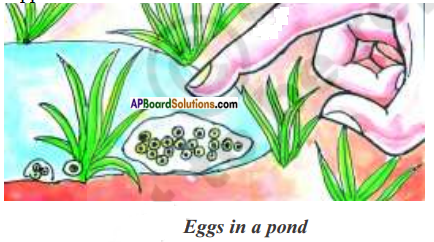 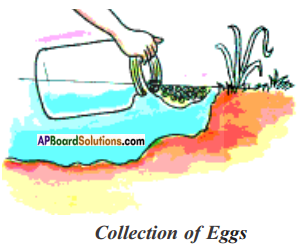 Step – 2: After collecting eggs, take a tub of 15 cm depth and a radius of 8-10 cms. Transfer the eggs along with the weeds and algae that you have collected from the pond into the tub. Carefully observe the eggs. You will find a blackish part in the middle of the eggs. That is the embryo of the frog.

Step – 3: Observe the tub daily and note down the changes in your observation book. Draw diagrams after observing for atleast once in three days.

CHANGES TAKES PLACE FROM EGG TO ADULT IN FROG 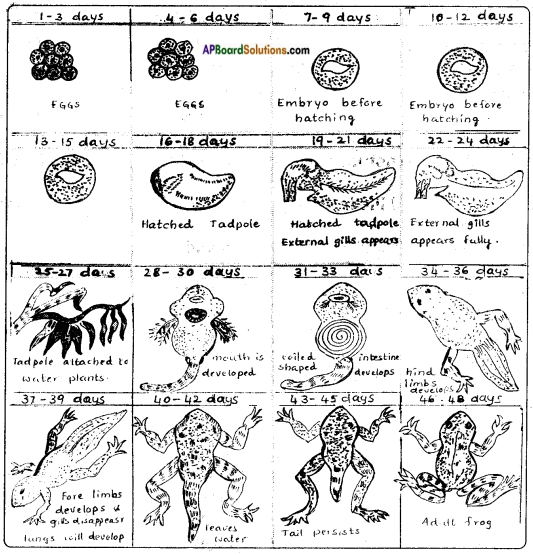 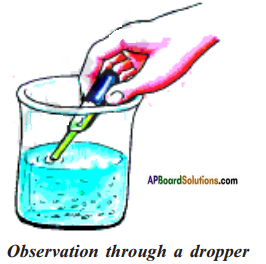 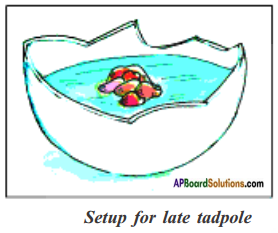 Question 4.
Do all animals lay eggs?
Answer:
All animals do not lay eggs.

You can also add some more names of animals you know to this table.

Question 9.
Think how animals could hear without external ears?
Answer:
Though the animals do not have ears to hear, they can sense the surrounding by its body.

Question 10.
Read the names of animals given below and try to fill the table given below.
Cow, Rat, Crow, Pig, Fox, Hen, Camel, Duck, Frog, Elephant, Buffalo, Pigeon, Cat, Peacock, Lizard. You can also add a few more animals to this list.
Answer:

Question 1.
Draw the diagram of Hydra. Compare it with the figure below recall what you have observed in the first slide ?

Compare slide 1 & 2 to observe which part of it’s body develops a swelling?
Answer:
The body wall develops swelling. Observe all the remaining slides.
a) What have you observed in slide/picture 1, 2 and 3?
Answer:
Picture 1, 2 the body surface of hydra has smooth surface.
Picture 3, a swelling is formed on it’s body surface.

b) What is the main difference between slide 1 and 2 as well as 3 and 4?
Answer:
Slide 1 and 2 Hydra body is smooth.
Slide. 3, a swelling is formed. Swelling increases in size, tentacles are formed which is called bud.
Slide 4, the bud is cut off and separated from parent Hydra and can live individually.

c) What does swelling (bulge) develop into?
Answer:
The swelling develops into a bud.

Question 2.
Observe the given diagram carefully and fill the following table: 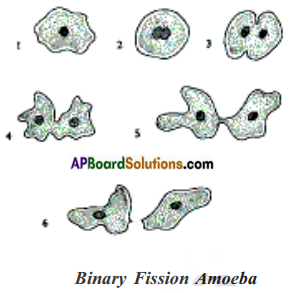 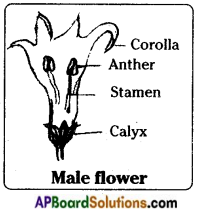 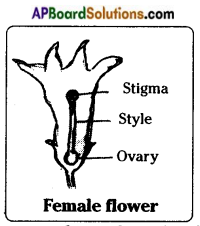 2) Why animals give birth to their babies?
Answer:
To continue their species on the earth.

3) What happens if each couple give birth to more than two babies?
Answer:
The population increases.

Question 3.
Observation of resemblance in Parents & Children.
Table given below will help you to note the similar and dissimilar. Fill in the table. 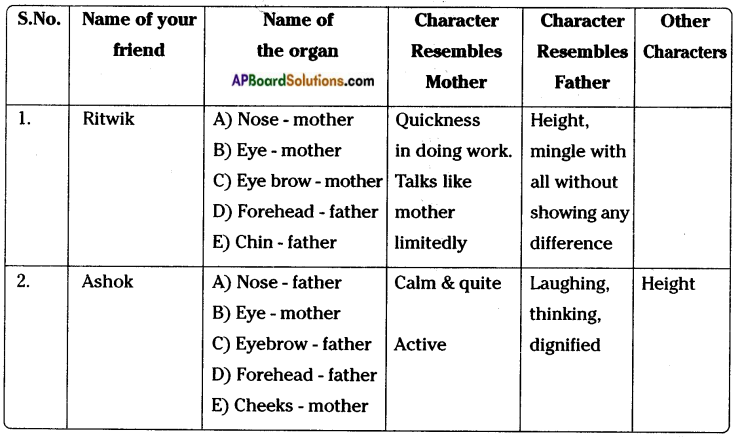 You can ask your teacher and know why sometimes no characters match with your father or mother.
Answer: