Question 1.
How does air pollution lead to water pollution?
Answer:

Question 2.
What steps can be taken up to control air pollution and water pollution?
Answer:
Some of the methods for controlling air pollutions are:

Prevention and controlling of water pollution

Question 3.
Why does the increased level of nutrients in the water affect the survival of aquatic organisms?
Answer:
Plants nutrients:

Question 4.
Road side plants cannot grow properly. Find your own reasons and explain with your argument.
Answer:

Question 5.
Sudheer is a traffic constable. What do you think about his health? Give some suggestions to protect his health during duty period.
Answer:

Question 6.
Write a short note on the effects of water pollution in your village. Suggest precautions.
Answer:

Question 7.
Visit a pollution check centre. Observe the process of conducting a pollution check and record your findings. You may consider the following areas your record.
Average number of vehicles checked in a certain time period, Time taken to check each vehicle, Pollutants checked for, The process of testing, Permissible limits of emission of various pollutants, Measures taken if the emitted gases are above the permissible limits.

Question 8.
Organize a field visit to a pond/lake/river present in or near to your village with the help of your teachers.
Observations followed by discussion could focus on…. The history of the pond or lake or river, Water resources available other than that river/pond/or lake, Cultural traditions, Pollution concerns, Source of pollution, Effects of pollution on the people living by the river side as well as those living far away.
Answer:
Kolleru lake: It is a 2nd largest fresh water lake located in Andhra Pradesh located between Krishna and Godavari delta.
History: Two copper plates of the early Pallava dynasty have been found in the lake, tracing it’s history to Langula Narasimha Deva an Ganga Vanshi Odisha King. According to legend, the Gajapathi fort was located at Kolleti kota on one of the eastern islands of the lake. The enemy general “Muhammadan” general escamped at “Chiguru kota” located on the shores. In some ways the lake protected the Oriya forces. The enemy finally tried to excavate a channel, the modern day Upputeru. So that the water of the lake would empty into the sea and the level would fall so that they could attack the Gajapathi fort. The royal oriya army general sacrificed his own daughter to propitiate Gods and ensure his success against Muhammadan and her name was “Perantala Kanama”. Therefore the channel Was called perantala Kanama. “Sri Peddinti Ammavari Temple” is one of the oldest and famous temples found in Kolleru.
Water sources available other than Kolleru: Wells, taps. The lake is fed directly water from seasonal Budameru and Tammileru streams and connected to the Krishna and Godavari systems by channels.
Cultural traditions: The vast majority of the district is rural in nature. Thus the culture of the kolleru lake people is mostly conservative and traditional. The joint family system, the arranged marriages are the norms. Telugu language is spoken in this place. Pollution concerns: Kolleru lake is suffering from the unsatisfied greed of people and selfish interests of mankind who exploit the lake’s integrity. Thousands of fish tanks were dug up effectively converting the lake into a mere drain. This had great impact in terms of pollution, leading to difficulty in getting drinking water for the local people.
Source of pollution: Satellite images taken on February 9, 2001 by the Indian remote sensing satellite found that approximately 42% of the 245 km2 lake was occupied by aquaculture. While agriculture had encroached another 8.5% they were mostly rice paddies. Surprisingly no clear water could be found in the satellite image. The rest of the lake is being diminished by weeds like elephant grass and water hyacinth.
Effects of pollution on people: Thousands of fish tanks were dug up effectly leading to difficulty in getting drinking water for the local people. An adverse effect on the thousands of acres of crop in the upper reaches of water flow into the sea because of obstruction by bunds of the fish tanks that appeared illegally. 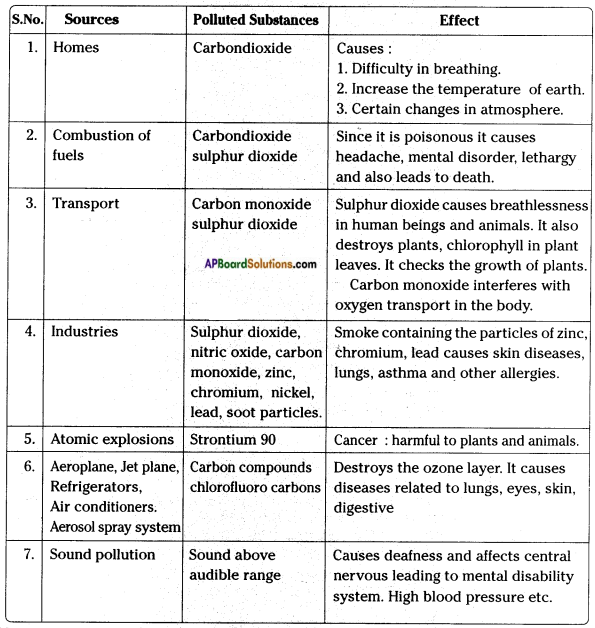 COMMON POLLUTANTS AND THEIR SOURCES 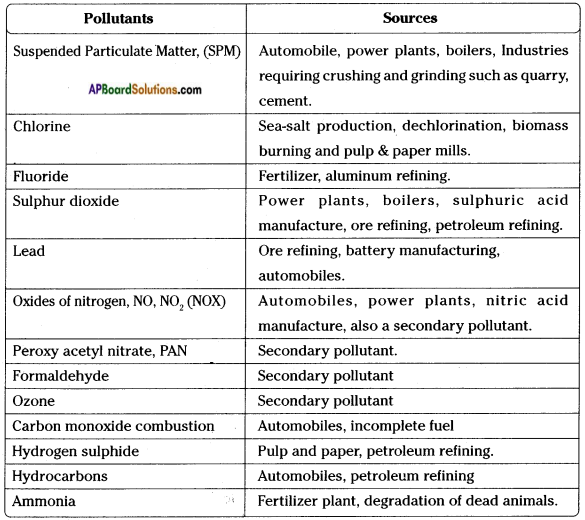 Question 11.
If our monument like Tajmahal is effected by air pollution, what is your advise to protect it?
Answer:
The Taj Mahal one of the seven wonders of the world is located in Agra. It is made of white marbles. The effect of pollutants like SO2, NO2, smoke, dust, soot, etc. on it has turned the marble from white to yellow.
Precautions to protect Taj Mahal:

Question 14.
“Use Bicycle – Avoid motor bikes and cars”. This slogan is prepared by Sravani. Prepare some more slogans on pollution.
Answer:

Question 1.
Observe this certificate try to find out answers for the following questions.
Answer:
The pollution under control certificate 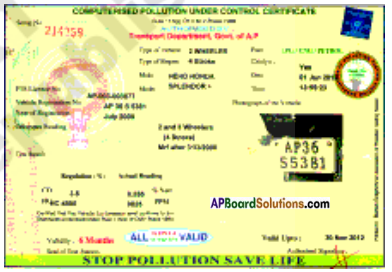 b) For how much time is it valid?
Answer:
It is valid for six months.

f) Think of why there is a peed of “pollution under control certificate”?
Answer:
With a rapid increase in Ifie number of vehicles the problem of automobile pollution has assumed greater significance. The emission of smoke from motor vehicles is a major source of air pollution.

Question 5.
Draw a neat diagram showing the composition of air in the atmosphere arid write the percentage of gases.
Answer:

Question 6.
Collect the pictures of natural activities and human activities which leads to pollution and paste them in your record book.
Answer: 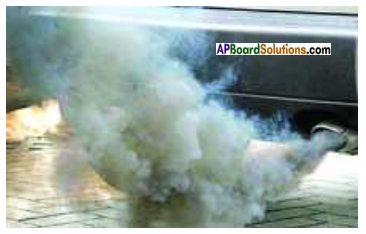 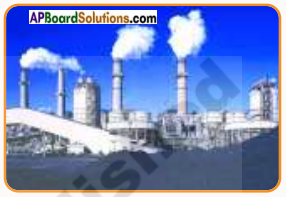 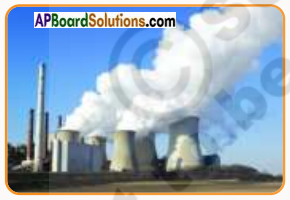 Question 7.
If a person burnt out types or dried leaves at a particular place. Where shall go the smoke and ash goes?
Answer:
The smoke and ash raise up, mixes with gases in the atmosphere which leads to pollution. 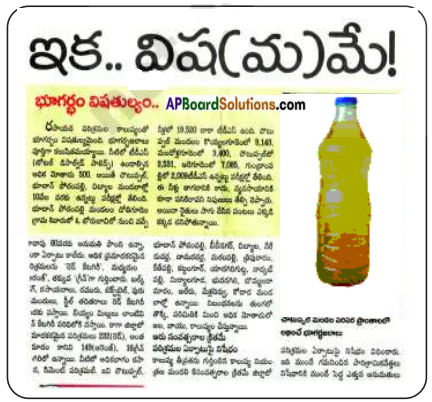 Answer the following questions based on your understanding of the paper clipping.
a. What do you understand after reading the news paper clippings?
Answer:
Some areas in Nalgonda district, the water got polluted because of the chemicals dissolved in it. These chemicals are released Into the water by the oil factory, textiles, pesticide factory and steel factory.

b. What are the issues discussed in this news paper clipping?
Answer:
Total dissolved solids (T.D.S.) in water should be maximum 500. Due to pollution it is estimated that T.D.S. has reached to 10,000. The pollution in water is higher which is dangerous for use.

c. What are its causes and effects?
Answer:
The causes for the TDS: The chemical pollutants released by the factories into the water. Effects: The water becomes unfit for drinking. By using the water the crops are beeing dead.

Question 1.
NATURAL DISASTERS POLLUTION
Collect information from your school library for the following natural disasters in the world.
Answer:
Volcanic eruptions:
Deep under the earth’s surface, it’s so hot that even rock melts. Sometimes this molten rock, called ‘magma’, is pushed up to the surface. At this point it is referred to as lava. And the opening or vent that lets the lava out is a volcano. ‘
A volcano may explode violently throwing out rocks for miles around. It releases various gases and ash into the atmosphere.

Forest fires:
Forest fire is a moving combustion reaction spreading outwards in a band from it’s ignition point leaving burnt forest behind it and also called as wild fire.
It can be large uncontrolled disasters that burnt through hundred to hundred thousand acres.
Causes : Natural cause, lightening, volcanic eruptions, sparks from rocks falls and spontaneous combustion.
Pollution :
Forest fires release carbon particles (ash) into the air and pollute the air.

Sand storms and Tsunamis:
A sand storm or a dust storm is a meteorological phenomenon common in arid and semi arid regions. They arise when a gust front or other strong wind blows, loose sand and dirt from a dry surface. Particles are transported by saltation and suspension. The Sahara where sand is more prevalent, soil type than dirt or rock.
Causes:
As a force of wind passing over loosly held particles increased, the particles of sand first start to vibrate, then to saltate. As they repeatedly strike the ground, they loosen and break off smaller particles of dust, which then begin to travel in suspension.

Question 2.
A) OIL PAPER EXPERIMENT
Answer:
Take three square pieces of white paper of 5 x 5 cm size dipped in oil. Hang these oil dipped paper at three different locations, say your backyard, your school, near a park or parking lot etc. Let it be there for 30 minutes. Observe and compare all three papers.
a) What did you found on those papers dipped in oil ?
Answer:
Some dust particles sticking to the oil paper.

B) HUMAN ACTIVITIES:
Name of the fuels we burnt in our daily activities including rural and urban areas.
Answer:
Petrol, diesel, wood, charcoal, tyres etc.

Question 3.
POWER GENERATION PLANTS.
Go to your school library and collect information to make a list of these power generation plants and where they are located.
Answer:
THERMAL POWER PLANTS 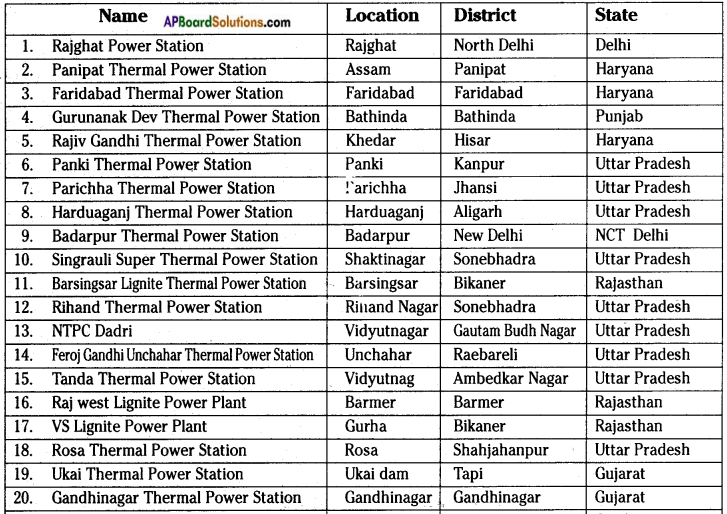 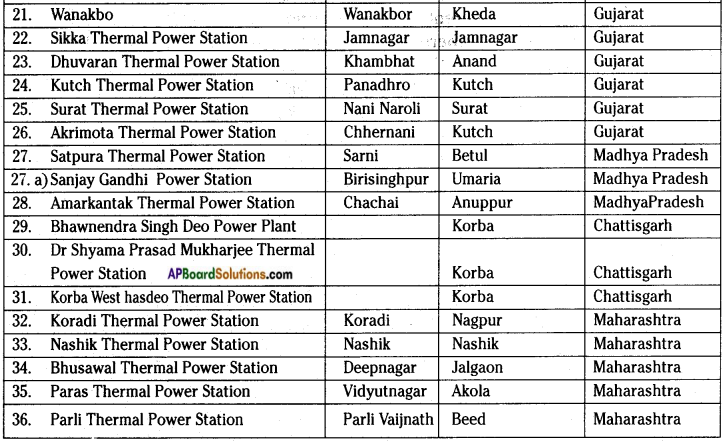 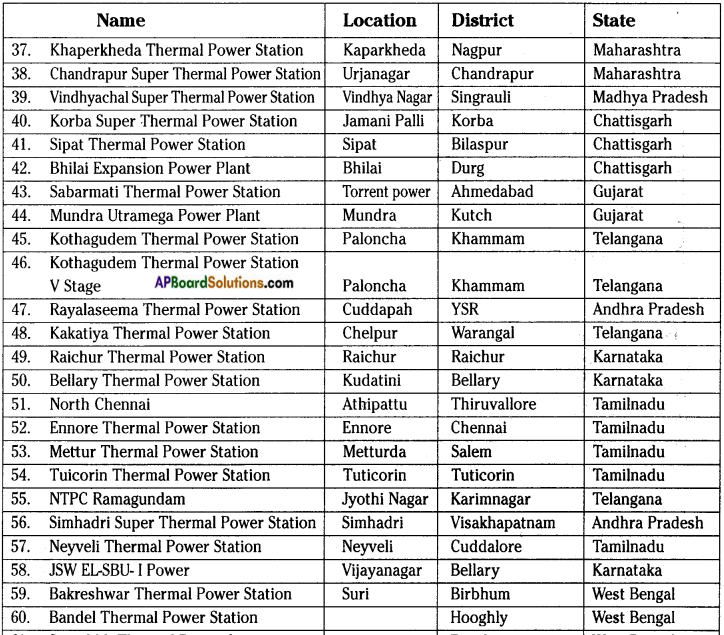 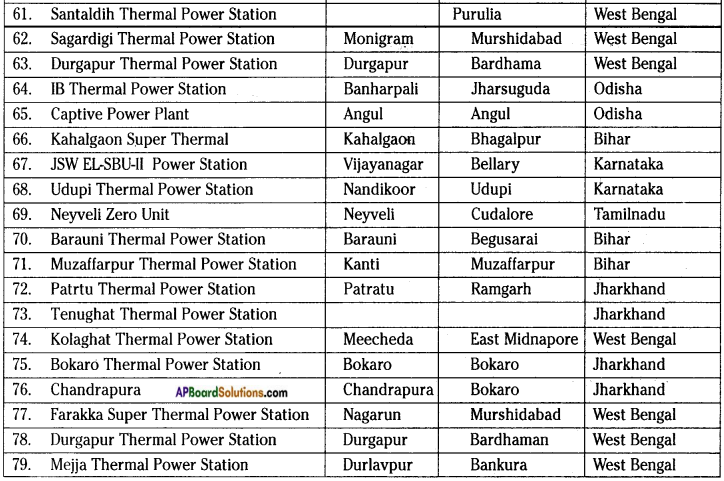 Observations and findings:
Record your observation in the following table.

Question 6.
Visit your nearby pond/lake or river and find out the material being discharged in it. Prepare a biography on it.
Answer:
As Hyderabad has grown in size and is emerging as a global mega city, its growing water requirements have been met by under taking long distance water projects over the years. These projects are dependent on Musi River. Thousands of people depend on it for their daily needs and livelihood. The Moosi has been polluted for many years.
The people living near the Musi river, throw large quantities of garbage, untreated sewage, industrial waste, dead bodies, polythene bags, hot water and statues of deities and many other materials directly in to the river. –
The ‘Musi reservoir action plan project’ was undertaken to reduce the pollution level in the river. Pollution control activities include under the project are:

Ask your teacher about aerobic bacteria and write a note on it with some examples.
Answer:
An aerobic bacteria is the one that can survive and grow in an oxygenated environment. Bacillus, nocardic and pseudomonas space aeruginosa, myobacterium tuberculosis are some of the examples of aerobic bacteria.

Do you know oil slick on sea water ?In what way it is dangerous to aquatic life?
Answer:
Several kinds of plants and animals live in oceans. Oceans maintain equilibrium in nature. We transport several kinds of oils and fuels over seas. The spillage of these oils and fuels by accident creates a layer of oil over the surface of the sea water for hundreds of kilometers. This is called oil spill or oil slog. When it happens, air and light cannot enter the sea water and several marine creatures like fish, tortoise and other marine life forms die of asphyxiation.

Question 1.
When we go on a busy road in the evening a lot of smoke is spread in the surroundings. We get cough and feel uneasy even when we close the nose with napkins.
a) Why this type of symptoms we observe? Think about it.
Answer:
Carbon monoxide is poisonous gas combines with haemoglobin of our blood and forms carboxy haemoglobin. Due to this haemoglobin is unable to carry oxygen to various parts. This leads to respiratory problems. It causes suffd&Stion and may cause even death.

b) If these symptoms will continue, what happens?
Answer:
Air pollution is like a slow poison. The effect of air pollution are not seen immediately. But over a long period of time the pollutants present in air damage our health and property.