Question 2.
What is a Shikhara?
Answer:
The multi-storeyed towering gateway – built on the central shrines on a scale and height is called a Shikhara. These structures of immense scale must have been a mark of imperial authority. They were probably meant as reminders of the power of the kings, able to command the sources techniques, and skills needed to construct these towering gateways.

Question 3.
What are the elements of a Mughal Chahar bagh garden?
Answer:
In his autobiography, Babur described his interest in planning and laying out formal gardens, placed within rectangular walled enclosures and divided into four quarters by artificial channels. These gardens were called Chahar bagh four gardens, because of their symmetrical divisions into quarters. Beginning with Akbar some of the most beautiful Chahar baghs were .constructed by Jahangir and Shah Jahan in Kashmir, Agra and Delhi.

Question 4.
How did a temple communicate the importance of a king?
Answer:
The largest temples were all constructed by kings. They were meant to demonstrate the power, wealth, and devotion of the patron. The temple was a miniature model of the world ruled by the king all his allies. As they worshipped their deities together in the royal temples, It seemed as if they brought the just rule of the gods on earth. The king and nobles endowed the temples with land, gold, and jewels so that worship of the gods could be carried on a grand scale. These temples are thus the center of political and economic power.

Question 5.
Read the second part of the introduction part of page 189 and comment on it.
Between the eighth and the eighteenth centuries kings and their officers built two kinds of structures: The first were forts, palaces, and tombs – safe, protected, and grandiose places of rest in this world and the second were structures meant for public activity including temples, mosques, tanks, wells, caravanserais, and bazaars. Kings were expected to care for their subjects and by making structures for their use and comfort, rulers hoped to win their praise. Construction activity was also carried out by others, including merchants. They built temples, mosques, and wells. However, domestic architecture – large mansions (Havelis) of merchants – has survived only from the eighteenth century.
Answer:
During the period from 8 to 18th century, the kings were interested in construction activity. They constructed forts, palaces, tombs, temples, mosques, tanks, wells, etc. They constructed them as a mark of their art and architecture.

Question 6.
How did the Mughal court suggest that everyone – the rich and the poor, the powerful and the weak – received justice equally from the emperor?
Answer:
The connection between royal justice and the Imperial Court was emphasized by Shah Jahan in his newly constructed court in the Red Fort at Delhi. The construction of Shah Jahan’s audience hall aimed to communicate that the King’s justice would treat the high and the low as equals where all could live together in peace and harmony.

Question 7.
The rich and the powerful construct large houses today. In what ways were the constructions of kings and their courtiers different from them?
Answer:
Though the houses built by the rich and powerful nowadays are very large, they don’t have any beautiful gardens. Mughal nobility had constructed their homes on the banks of the river – Yamuna. These were set in the midst of formal gardens constructed in the Chahar bagh format.

Question 8.
Is there a statue or a memorial in your village or town? Why was it placed there? What purpose does it serve?
Answer:
Yes, there is Dr. B. R. Ambedkar’s statue in our village. It was placed by some of our villagers. It is to honor him as a framer of our Constitution.

Question 9.
Visit and describe any park or garden in your neighborhood. In what ways is it similar to or different from the gardens of the Mughals?
Answer:
There is a park at the end of our street. Our park is in a rectangular shape. There is a compound wall around the park. There are no channels in our park. But there is a tap to water the plants.
Moghul gardens are in a rectangular shape. They are placed within walled enclosures constructed by Babur. They are divided into four quarters by artificial channels. 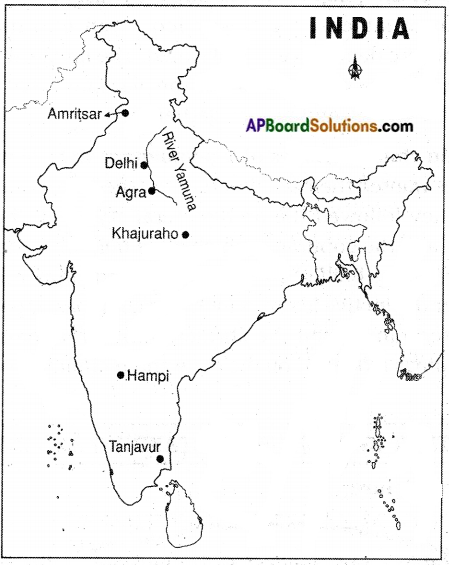