Question 1.
What are the common elements in the worship of most of the village deities?
Answer:
Whatever the region they belong to, whichever deity they worship, people use the same elements to worship village deities. They offer bonalu and offer sacrifices such as cocks, goats, and buffaloes. There are no priests and people pray to the deities in their own languages. In worshipping the deities the customs and traditions followed by the people of the different regions are the same.

Question 2.
When people go to towns and settle there, do they continue to worship their old village deities? How do they do it?
Answer:
They don’t lose their relationship with their village deities even after moving into cities. This is important for them. The traditions and customs and religious beliefs, whether they are scrupulous or unscrupulous are not easily forgotten or neglected. So they attend their festivals in villages. Those who have made some money help made a chariot or a cupola, or help build a shrine. At times, the group of families from a village, live in the neighborhood of cities, arrange for the deity to come to their place. The deity comes in full splendor. There is great feasting and for the whole time, she is there.

Question 4.
Do you think the way people worship the village deities is changing now? What kind of changes do you see?
Answer:
Yes. The people’s relations to the village deities in rural society are changing as a result of their economic hardships. These days celebrations of festivals and offering bonalu and sacrifices have become very much expensive. Though traditions and religious customs are not easily vanished from society, the economic hardships and penury of the people made them alienated from the celebration of rituals. Awareness campaigns made by the intellectuals and non – governmental organizations against the animal sacrifices made the people do away with this expensive extravaganza.

Question 5.
Point out the main places of important jataras and urs in Andhra Pradesh Map.
Answer: 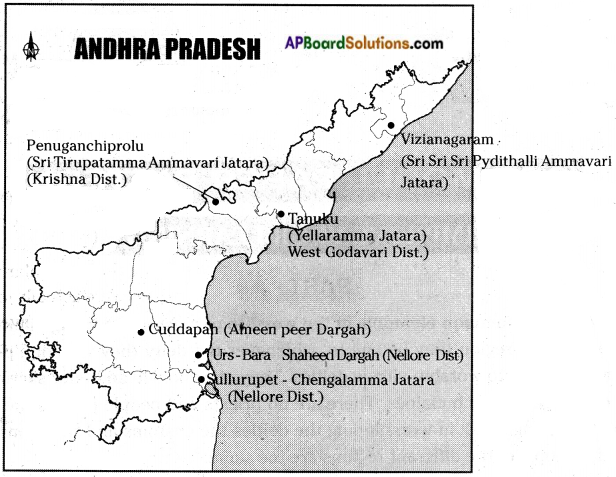 Question 6.
Read the fourth paragraph of page 178 and comment on it.
Most of these deities are worshipped by people irrespective of their caste or religion or economic status. For example, even Muslim farmers participate in many of the ravels of village gods. Similarly, people of all religions throng to the dargahs to seek the blessing of their peers. They tie strings on a tree or on the walls of the dargah making a vow in return for the wishes granted. They request the pirzadas to prepare tawiz for them to drive away evil spirits.
Answer:
Most religions have so much in common with each other, including their basic moral principles we can say that this is religious integrity in India.

Question 7.
Collect the following particulars by talking to the people of different religions in your area.