Students can go through AP Board 7th Class Maths Notes Chapter 5 Triangle and Its Properties to understand and remember the concepts easily.

→ Triangles can be classified according to properties of their sides and angles. Based on sides, triangles are of three types. 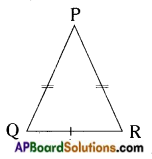 The non-equal side in an isosceles triangle may be taken as base of the triangle.

→ Based on angles, triangles can be classified into three types.

In △COT
ZO is right angle (i.e) 90°.
A triangle cannot have more than one right angle, 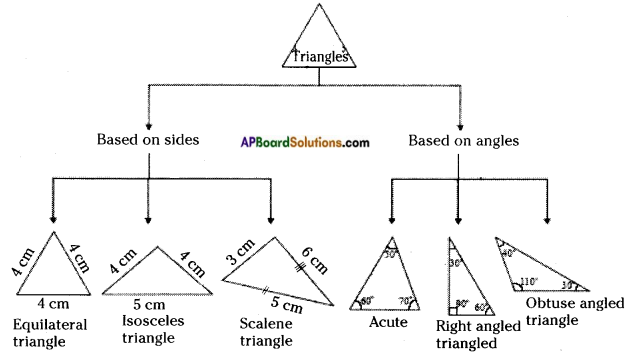 → Relation between sides of a triangle
In any triangle the sum of the lengths of any two sides is greater than the length of the third side.

→ Altitutes of a triangle
The length of a line segment drawn from a vertex to its opposite side and is perpendicular to it is called an altitude or height of the triangle. An altitude can be drawn from each vertex. 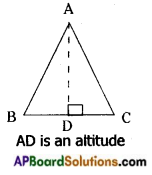 Altitude of a triangle may be in its interior or exterior.

→ Medians of a triangle
A line segment joining a vertex and the mid-point of its opposite side is called a median.

→ Angle – sum property of a triangle: The sum of interior angles of a triangle is equal to 180° or two right angles.

→ Exterior angle of a triangle

→ When one side of a triangle is produced, the angle thus formed is called an exterior angle. 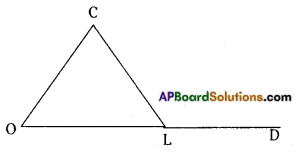 In △COL; the side OL is produced to D.
∠CLD is an exterior angle.
The exterior angle of a triangle is equal to the sum of the interior opposite angles.
∠COL + ∠OCL = ∠CLD