Question 3.
Write any four activities organized by the government in our times.
Answer:

Question 5.
How would your school function if it was run by all the students and teachers together? Would you want everyone to participate in taking decisions? or would you like to elect representatives? Give reasons?
Answer:
If a school is run by all the students and teachers so many good decisions can be taken for the prosperity of the school. Teachers can express the problems faced by the students and students can also express their problems.
This will lead to a friendly atmosphere in the school. Because a school is a small unit both ways can be implemented. Teachers’ and students’ interactions will help the students in the future also. They can express their views freely in the future also. Nowadays in so many job interviews and group discussions are followed. There are opinions are to be expressed. If we follow this method from the school level it will be beneficial for the students.

So, Satwik’s father might have decided to set up the shop.

Question 8.
Padma’s mother asked all children where they would like to go on Sunday. Two children wanted to go and watch a film and three wanted to go to the park. If you were in Padma’s place what decision would you take? Give reasons.
Answer:
If I am Padma’s mother I will take them to the park on that Sunday because three of them are interested to go to the park.
I will convince them that I will take them to the cinema another Sunday.

Question 12.
Every state and union territory in India has a Capital city. This is the headquarters of the state government. Point put the following state capitals which are the headquarters of the state governments concerned in the next page given India Map.
1. Maharashtra
2. Tamilnadu
3. Andhra Pradesh
4. Karnataka
5. West Bengal
6. Telangana
7. Ladakh
8. Punjab
9. Kerala
10. Arunachal Pradesh
11. Madhya Pradesh
12. Jharkhand
13. Chattisgarh
14. Uttarakhand
15. Gujarat
16. Odisha
Answer: 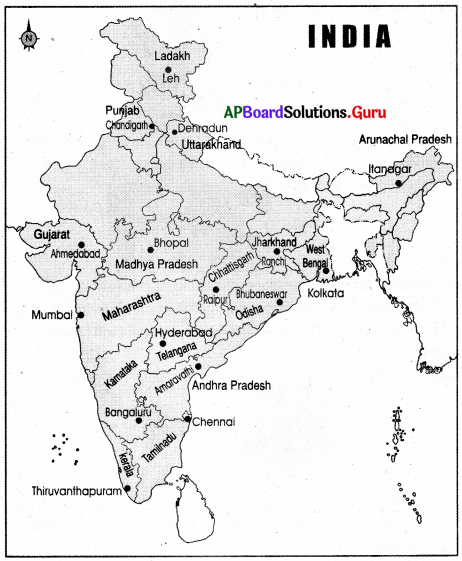 1. Collect some logos and information about different welfare schemes of our government.
Answer:

2. Collect the pictures of the President of India, Prime Minister, Governor and Chief Minister, your local M.P (Lok Sabha), and M.L.A from newspapers and prepare a scrapbook.
Answer:
Student Activity.

Question 1.
Look at the newspaper headlines below and list the different activities of the government. (Textbook Page No. 101) 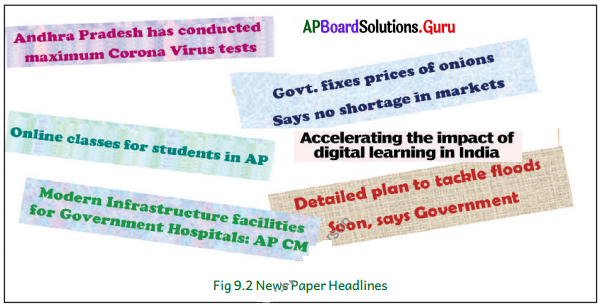 Question 2.
With the help of your teacher, try to know the above Logos and pictures of government schemes (Refer Text page 102 for the figure). Fill the following Mind map. (Textbook Page No. 102) 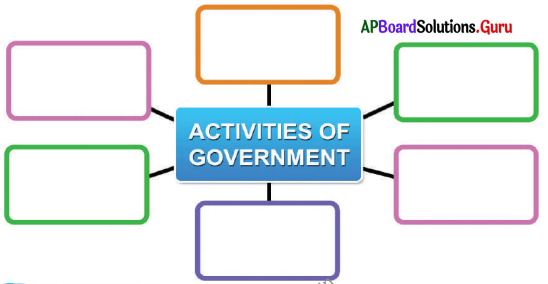 Question 3.
Observe the following pictures. Write the name of the government in respective boxes. (Textbook Page No. 103) 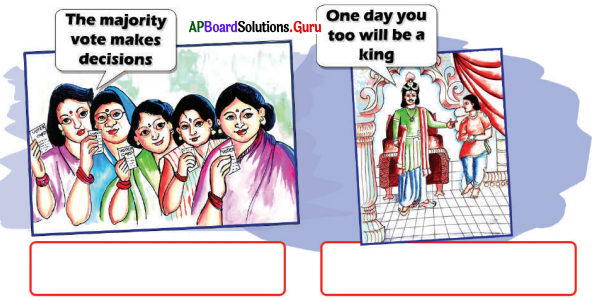 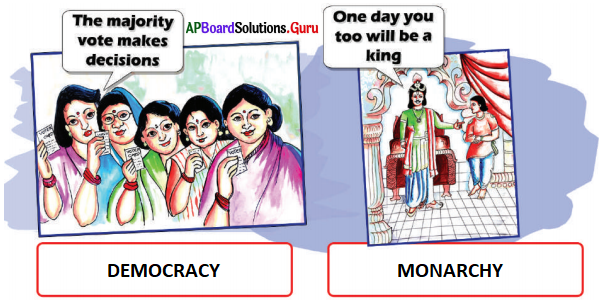 Question 4.
Conduct a model election with the help of your teacher. Observe the process of the election. (Textbook Page No. 105)
Answer:
Students: Good morning teacher.
Teacher: Good morning my dear children. Today let us conduct a model election in the class. You all select a student among you as your class leader.
Students: OK teacher.
Teacher: Two of you can contest for the class leader post. Take a piece of paper of the same size.
Students: OK teacher.
Teacher: OK. Now write the name of the student whom you want to be the class leader on the piece of paper you have taken. Fold the paper and put that paper in the box kept in the corner of the room.
Teacher: Now open the box and count who got more votes. According to the majority who get more votes will be declared as the class leader. Like this in a democracy elections will be held. A candidate who gets more votes will be declared elected.

Question 5.
Ask your parents and, find out the problems they observed in the electoral system and prepare a report. Discuss it in your class and find solutions for these problems. (Textbook Page No. 105)
Answer:

Question 3.
Name some more works of the government.
Answer:

Question 5.
What kind of government do you like? Why?
Answer:
I like the democratic type of government. Because we can express our ideas freely without any hesitation and fear. If they are better, sometimes they can be followed also.

Question 7.
What are the differences between monarchy and democracy?
Answer:

Question 2.
Observe the world map given below and list out the countries that are following the parliamentary system and the presidential system separately. (With the help of your teacher). Refer to the world map given at the end of the book. (Textbook Page No. 106) 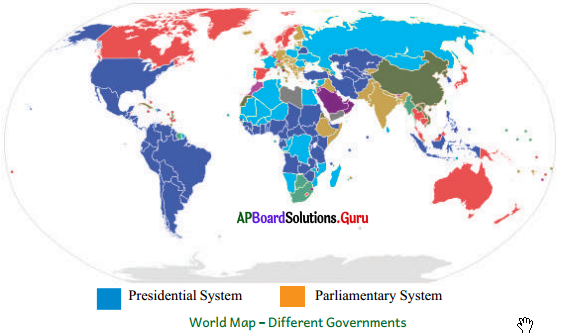 Question 3.
With the help of your teacher try to know who is part of the central government and state government. (Textbook Page No. 107)
Answer: