Question 1.
How does a planet differ from a star?
Answer:
Stars have their own heat and light and planets have to depend on stars for light and heat.

Question 2.
What is meant by the ‘Solar system’?
Answer:
The eight planets which revolve around the sun, satellites and other celestial bodies are together known as‘Solar System’.

Question 5.
What is the Universe?
Answer:
Millions of Milkyway galaxies including the solar system together is called the Universe.

Question 6.
Air and water are essential to life on the earth. But now they are being polluted by humans. What happens to the life of humans on this earth if pollution increases further?
Answer:
Pollution contains toxins that adversely impact living creatures within them. Rising pollution will lead to premature aging. Human exposure to toxins will increase to a great extent if pollution is not controlled. This pollution is directly linked to cancer and heart diseases.

Question 7.
Scientists are now trying to explore more about the moon and other planets. Do you think their efforts benefit us?
Answer:
The efforts of scientists in exploring the moon and other planets definitely useful to us. Space exploration alone provides us a significant amount of knowledge which is important for the education of people also about our planet and universe. It increases the knowledge about space and the discovery of distant planets and galaxies and gives us an insight into the beginnings of our universe.

Prepare a model of the solar system.
Answer:
Student Activity.

3. Which is the third nearest planet to the sun?
A) Venus
B) Earth
C) Mercury
D) Jupiter
Answer:
B) Earth

Solve the puzzle with the terms defined in the following statements. 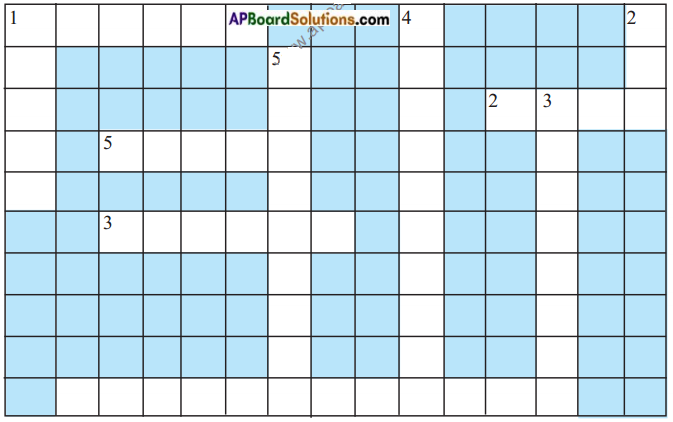 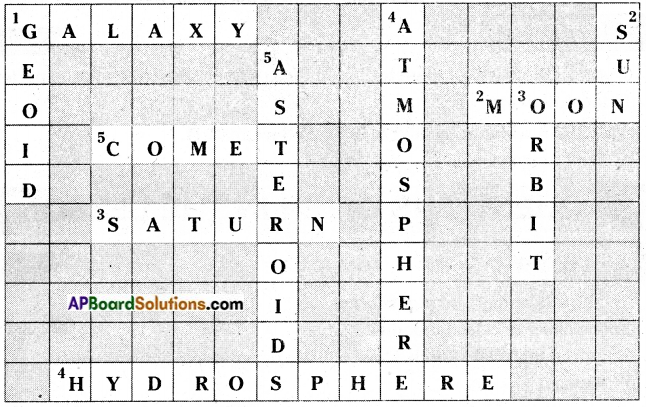 You might have heard that people make human chains and run for world peace etc. You can also make a Solar system and run for fun by using the following steps.
Step – 1: All children of your class can play this game. Assemble in a big hall or on a playground.
Step – 2: Now draw eight circles on the ground. Draw all circles in the same manner.
Step – 3: Prepare 10 placards. Name them as Sun, Moon, Mercury, Venus, Earth, Mars, Jupiter, Saturn, Uranus, Neptune.
Step – 4: Select 10 children in the following order and give each one of them a placard.
Order of placard distribution

Question 1.
Observe the video of Planetarium in the QR Code. Describe your experiences.

Question 2.
Observe the following picture and name the planets in the boxes given below. (Textbook Page No. 6) 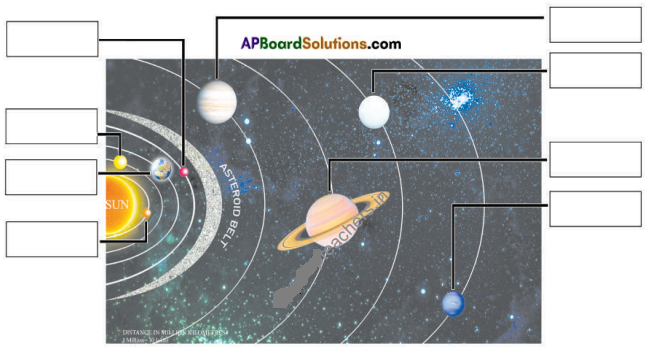 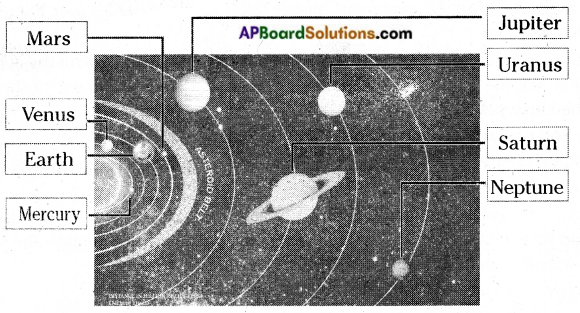 Question 1.
From ancient times people worship the Sim as God. Give reasons. (Textbook Page No. 4)
Answer:
Sun is glorified in the Vedas of ancient India as an all-seeing god who observes both good and evil victims. The Sun is the source of all life on our planet. Without the Sun we couldn’t be here. Sun is the only natural source of energy. So people in ancient times treated the Sun as a god and we worship him. 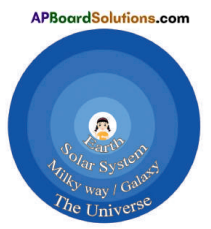 In 2006 the International Astronomical Union decided that Pluto is not having the technical qualities of a planet and reduced the number of planets from 9 to 8.