Look at the pictures and answer the questions that follow. 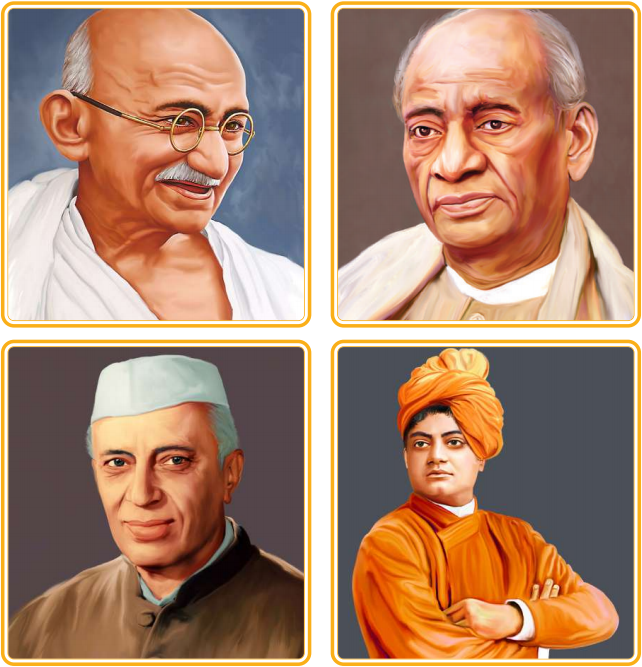 Question 2.
What do you know about them?
Answer:
Mahatma Gandhi:
He was the most important freedom fighter. He was called Mahatma and Bapuji.

Sardar Vallabhbhai Patel:
He was known as Sardar Patel. He was an Indian politician. He served as the first Deputy Prime Minister of India. He was called the ‘Iron Man of India’.

Jawaharlal Nehru :
He was an Indian politician. He served as the first Prime Minister , of India. He was called ‘Cha-Cha’. He was fond of children.

I. Choose the correct answer from the choices given below:

Question 1.
When and where was Ambedkar born?
Answer:
Ambedkar was born on 14th April 1891 at Mhow in Madhya Pradesh.

I. Read the following sentences. Circle the wrongly spelt words and write the correct spelling.
i. Ambedkar’s acheivements inspire us.
ii. Untauchability is inhuman.
iii. Babasaheb was a varacious reader.
Answer: 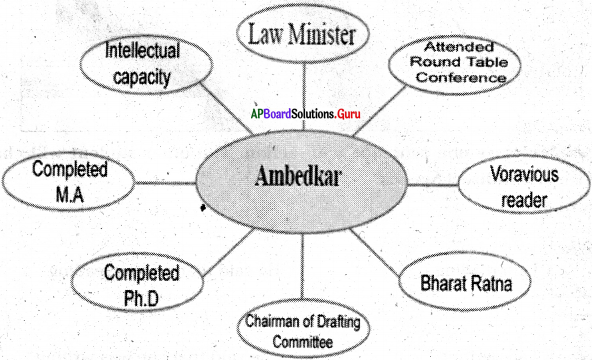 I. Look at the following sentences from the lesson.

Bhimrao went to a man there and said, “We are very thirsty, please give us some water.”

In the above sentence, the words within the inverted commas are the actual words of Bhimrao. It is called Direct Speech.

When the words are said to another speaker as shown below, it is called Indirect Speech (Reported Speech).

Bhimrao went to a man there and said that they were very thirsty and requested him to give them some water.

Each student says one sentence with action. The other student will change the sentence into Indirect Speech.
For Example :

II. Read the following sentences from the lesson.

1. The man replied rudely.
2. I have rea//y been inspired by Babasaheb.

In the above sentences the words ‘rudely’ and ‘really’ are used to describe actions. They are called adverbs.

Most of the adverbs are formed by adding 7/ to adjectives.

Write the adverbs of the following adjectives.

III. Fill in the blanks with the suitable adverbs given in the box.

The letters that are written to authorities and business people are called official letters.

Now write a letter to the Principal / Headmaster of your school requesting him/her to issue your study certificate. 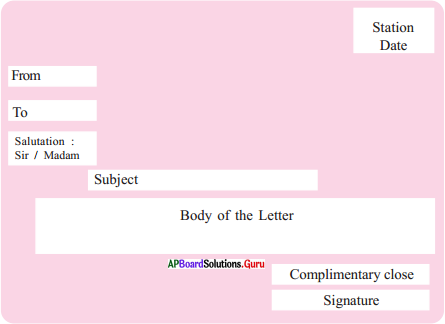 Observe the given cartoon.

What do you think Jerry is saying to Tom? Write a comic dialogue for this cartoon.
Answer: 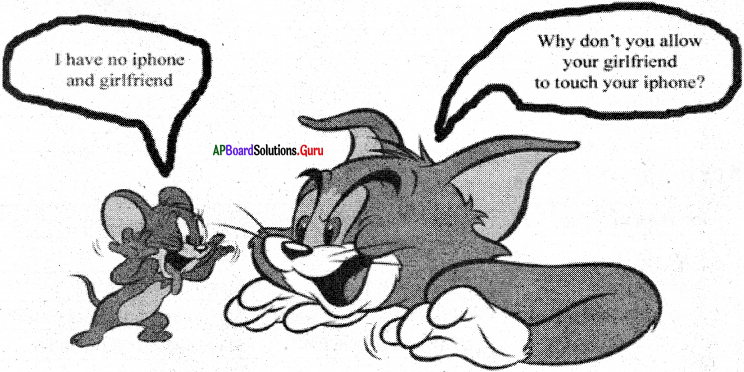 1. Asking for and giving permission:
We use ‘can’, and may’ to ask for permission. 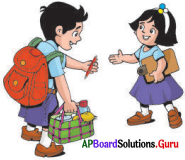 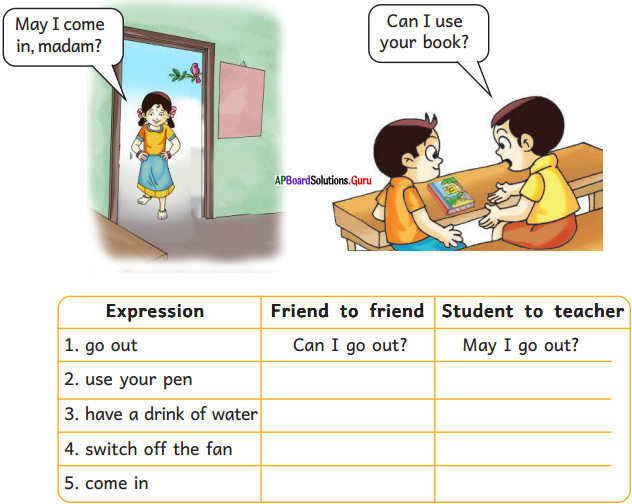 A. Asking for and giving permission :

B. You want to go on a picnic with your classmates. You need permission from your parents.

Now prepare a conversation between you and your mom in this context.
Answer:
I : Can 1 ask you one thing?
Mother : Sure.
I : Can I go on a picnic with my classmates?
Mother : Certainly!
I : Can I ask you to prepare my favourite food?
Mother : Why not?

Once there lived three friends Vani, Kavya and Sumi. They always played jokes on one another. One day, Vani bought some delicious black plums. The three of them sat and started eating the black plums. Suddenly Sumi decided to play a trick on Kavya. When she looked under her chair, she saw a small heap of plum seeds. She stealthily pushed the heap of seeds under Kavya’s chair. 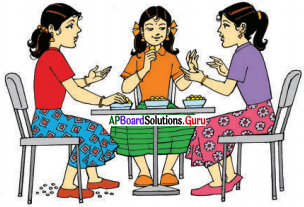 Then Sumi said, “What is this Kavya? You are so greedy! You alone have eaten so many black plums.” Kavya felt bad and didn’t know what to say.

Vani looked here and there. When she looked under Sumi’s chair, there were no seeds. So, she replied, “Sumi, Kavya was at least greedy, but see yourself, you have eaten all the black plums including its seeds.” Then, Kavya understood that her friend had just played a trick on her and then all three of them laughed heartily.

BAR GRAPH
The following bar graph shows the marks secured by five sixth class students in the final exam. Use the graph to answer the questions. 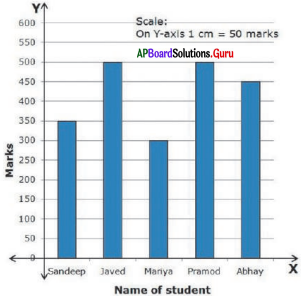 1. What does the bar graph show?
Answer:
The marks secured by five sixth class students in the final exam

Question 1.
Talk about the great achievements of Malli Masthan Babu.
Answer:
Malli Masthan Babu was regarded as the fastest ‘seven summiteer’. He successfully climbed and reached the highest peaks in all the seven continents in the year 2006.

Question 2.
How are you inspired by the achievements of Malli Masthan Babu?
Answer:
One can learn that we should have uncrusha.ble spirit to achieve a success.

Question 4.
Have you ever seen a hill or a mountain? Describe it in two or three lines.
Answer:
Yes, I have seen a small mountain near our village. It is famous for its temple. On the highest point of the hill, there is a temple. The hill is full of green trees and colourful flowers.

Swapna wrote a letter to her friend Kusuma describing the details of her project work. In her letter, she mentioned some important incidents in Dr. B. R.Ambedkar’s life.

When Bhimrao was nine years old, he, along with his brother and cousin, went to Koregaon to spend the summer vacation with his father. On the way, they were ill-treated by the cart-man. A man refused to give drinking water. They had to sleep without water and food.

There was a Brahmin teacher in his high school who showed great love and affection for Bhimrao. Dr. Ambedkar remembered the teacher throughout his life.

Ambedkar felt that lack of education is the root cause of caste discrimination in India. He decided to uplift the oppressed classes and remove caste barriers.

Ambedkar went to the USA to join Columbia University. He completed his M.A and Ph.D. there. Then, he joined the London School of Economics and graduated in Political Science.

Babasaheb was a voracious reader throughout his life. He purchased about 2,000 old books when he was in New York.

In the year 199p, Dr. Ambedkar was awarded the ‘Bharat Ratna’ after his death. The Government of India released a stamp in memory of his valuable services to modern India.

In her letter, Swapna says that Babasaheb achieved such success because of his reading habit.

Malli Masthan Babu belonged to Nellore District. He obtained his M.Tech Degree from IIT – Kharagpur. He was interested in trekking and climbing high-altitude mountains.

Unfortunately, while descending the Andes, Malli was caught in bad weather and died on its slopes on 24 March 2015. But his uncrushable spirit inspires us forever.