Look at the picture and answer the questions that follow. 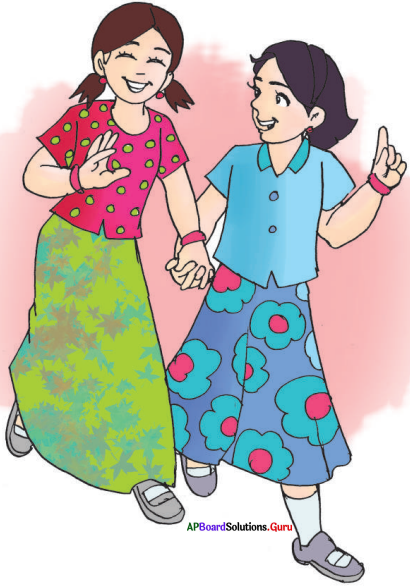 Question 2.
What are Mends for?
Answer:
Friends are to share our feelings, to eat and play together. Friends are helpful in times of need.

Question 4.
Is it hard to forgive Mends?
Answer:
No, it is not hard. It is easy to forgive friends.

I. Answer the following questions in one or two sentences.

Question 1.
How were the girls dressed?
Answer:
The two little girls were dressed in new clothes. The little girl was wearing a green skirt and the older a pink skirt.

Question 3.
Akulka grew angry at Malasha. What made her angry?
Answer:
At the puddle, Malasha splashed muddy water on Akulka’s new dress and face. This made Akulka angry,

Question 5.
How did the quarrel end?
Answer:
Parents realized their mistake after seeing Akulka and Malasha becoming friends again. They felt ashamed and stopped fighting. Thus the quarrel ended.

II. Complete the following choosing the correct options given after them.

5. The men also joined the scene. Here‘scene’refers to the
a) quarrel
b) puddle
c) war
Answer:
a) quarrel

III. Read and rearrange the following sentences in the order of their occurrence in the story:
1. Akulka and Malasha threw pieces of paper in water and played together.
2. Akulka’s mother slapped Malasha.
3. They wanted to play in the puddle.
4. Akulka and Malasha made a new rill to let the water flow.
5. The members of the two families started fighting.
6. It was Sunday and the two little girls were in their new dresses.
7. s Grandma tried to stop the quarrel.
8. Malasha splashed the muddy water on Akulka’s dress.
Answer:

I. The following are sentences taken from the lesson ‘Little Hearts’. Read them and encircle the word that does not indicate the given context.

II. Fill in the blanks in the following paragraph with the suitable words given in the box.

III. Read the following paragraph and write antonyms of the underlined words.

I. In the previous lesson you have learnt writing sentences describing ‘ongoing’ actions using Present Continuous Tense. We can change them into questions to confirm the information.
Examples:
It is raining. – Is it raining?
The girls are playing. – Are the girls playing?
Men are still fighting. – Are men still fighting?

Such sentences are called ‘Interrogative sentences’. Here they are in Present Continuous Tense. A sentence that asks a question is called an Interrogaltive sentence. It ends with a question mark.
Do you know how to write them as interrogatives?

Observe the following examples.
She is singing. – Is she singing?
They are coming. – Are they coming?

Change the following statements into questions.
1. The children are playing.
2. Students are waiting for their bus.
3. The teacher is walking slowly.
4. They are drinking water.
5. Usha is cleaning her room.
6. The girl is preparing tea.
Answer:
1. Are the children playing?
2. Are students waiting for their bus?
3. Is the techer walking slowly?
4. Are they drinking water?
5. Is Usha cleaning her room?
6. Is the girl preparing tea?

II. Degrees of Comparison
The adjectives change in form to show comparison. They are called the three degrees of comparison.

Read the following sentences.
1. Gopal is the tallest of all in the class.
2. Rani is cleverer than Ramya.
3. My house is as big as yours.

Read the following sentences and point out the adjectives and name the Degree of Comparison of each.
1. The train runs faster than the bus.
2. Lead is the heaviest metal.
3. Hari is the laziest boy in the class.
4. The two little girls are wiser than the older people.
5. Mount Everest is the highest peak of the Himalayas.
6. Iron is more useful than copper.
7. This is the most interesting story.
8. Ooty is cooler than Chennai.
Answer:
1. The train runs faster than the bus:
Adjective → ‘faster’ → ‘Comparative Degree’

5. Mount Everest is the highest peak of the Himalayas.
Adjective → ‘highest’ → ‘Superlative Degree’

Sir C.V. Raman was a scholar in sound and sound related physics. His research in optics, the Science of light resulted in the discovery of the Raman Effect. The discovery won him the Nobel Prize for physics. It was the first time the prize was awarded to an Asian! The scholar was the Pride of India.

The underlined phrases begin with either ‘a / an’ or ‘the’. These are called ‘Articles’. There are rules for the use of articles. Let us learn them in detail.
a) We use ‘a’ before singular common nouns that begin with consonant sounds,

b) We use ‘an’ before singular common nouns that begin with a vowel sound,

c) We use ‘the’
1. before a common noun which is mentioned for the second time.
e.g. I saw a dog. The dog was barking.

2. before superlative adjectives.
e.g. the largest, the best, the smelliest, the most.

4. before the names of musical instruments.
e.g. the guitar, the Violin, etc.

5. before a noun when we mean something in particular.
e.g. the Raman Effect, the TV, the Radio

6. with unique things.
e.g. the sun, the moon, the earth, the sky, the universe.

7. before the names of awards.
e.g. the Nobel Prize, the Bharat Ratna, the Padmabhushan, etc.

I. Look at the picture of ‘Peacock’. With the help of the following hints write a composition about the Peacock. 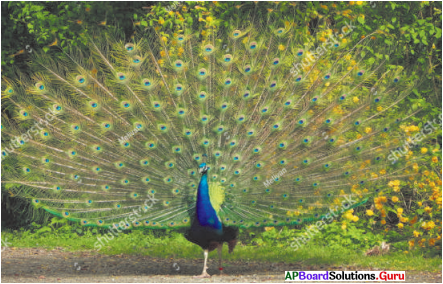 Hints : the peacock – our National bird – beautiful bird – different colours – long tail – about 2.25 mts. long – ‘eye markings’ on the tail – colours change in the sunlight – dances – rains – walks proudly
Answer:
The peacock is our National Bird. It is a beautiful bird with different colors of feathers. It has a long tail. The tail is about 2.25 mts long. We can see ‘eye markings’ on the tail. Their colours change in the sunlight. It dances in rain spreading the feathers of its tail. The peacock walks proudly with its colourful tail.

Read the following Telephone Conversation between Teju and Pranay. Teju’s brother Sanju is not at home. So, Teju writes a message for his brother as he has to leave for his tuition.
Pranay : Hello, can I speak to Sanju?
Teju : Sanju is not at home. I am his brother Teju.
Pranay : I am Pranay. Could you tell your brother not to come to Railway station today to pick me up? The train is running late by 8 hours.
Teju : Which train?
Pranay : The Rajadhani Express. It will arrive in Vijayawada by tomorrow at 8 o’clock in the morning. Tell him to come tomorrow morning.
Teju : I will surely pass the information.
Pranay : Thank you.

Read the message written by Teju after his telephone conversation.

Read the following Telephone conversation between Radha and her mother.

Mother : Hello, Radha, I’ll not come home now. We have an urgent meeting in the office. Do you have your dance class today?
Radha : Yes, mom, I have to leave now. What’s the matter?
Mother : Tell your father to come to NTR circle by 8 pm to pick me up. I’ll wait there.
Radha : O.K. Mom.

Now, Radha leaves message for her father. Write her message in the box provided below.

I. Say the following pairs of words aloud.

II. Here is an announcement in the School Assembly by the SPL. Read it.

Good morning to all. A good chance for us. Our school will organize an Inter¬School Science Exhibition on February, 22 from 10 am to 4 pm. Working models, informative charts and computer programmes will be exhibited. The best 10 models will be selected for District Level Science Exhibition. All the best. Thank you. Have a nice day.

Now make another announcement of your own, as your school students are going to Nagarjuna Sagar on an educational tour. Instruct them to get their parents’ permission letters for the two-day tour.
Answer:
Good morning to all. We are going to Nagarjuna Sagar on a pleasant educational tour, to get knowledge as well as pleasure. All the arrangements are made by our school management to make the trip successful. For this, we require letters of your parents’ permission for a two-day tour. Letters should be submitted to your class teachers within one week.

Listen to the following story and answer the questions. 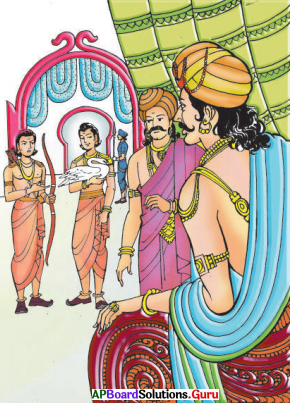 One day Devadutta came to the king’s court in an angry mood, “Your Majesty! I want justice,” he shouted.
“What has happened?” asked the king.
“Siddhartha has taken my swan. He’s not giving it to me,” said Devadutta.

The king was surprised because he knew that Siddartha was good and gentle. He never takes anything from anyone.
Just then Siddartha entered the court with a swan in his arms.
“Is that your swan?” the king asked Devadutta.
“Yes it is. I shot it,” said Devadutta.

“But the swan fell at my feet. I picked it up and took out the arrow from its side and applied medicine on its wound. I saved its life. The swan is mine,” said Siddartha.
The king asked his Chief Minister for advice.

The Minister said, “Devadutta shot the swan. If Devadutta killed the swan, then it would be his. Siddartha saved its life. So, the swan is Siddartha’s.”
1. Who came to the king’s court? Why was he angry?
2. “Siddartha had taken away something!” What had he taken?
(Note : Q.No. 2 & Q.No. 3 are same.)
3. What had Siddartha taken away?
4. What did Siddartha bring in his arms?
5. Why did Devadutta say the swan was his?
6. Where did the swan fall? How did Siddartha save the swan’s life?
7. Which do you think is better —- killing a bird or looking after it?
8. This story shows us that Siddartha was ………….
a) cunning
b) cruel
c) kind
Answer:

The king of Kosala killed the king of Benares and took the queen as a prisoner. But her son escaped luckily and grew in a countryside. He raised a large army and declared war against the Kosala king.

The prince’s mother heard of this threat from her son by some faithful servants. She was a gentle and kind woman who wanted to prevent violence and suffering and killing. So she advised him to close every entrance to the city. The prince decided to follow his mother’s wise advice. His army blockaded the city for seven days and nights. Then the citizens captured their unlawful king, cut off his head, and delivered it to the prince. He entered the city triumphantly and became the new king of Benares.

3. How did the prince get his kingdom back?
Answer:
The prince blockaded the city and made people wore down. The citizens captured their unlawful king and cut off his head, and delivered it to the prince. He became the new king of Benares. 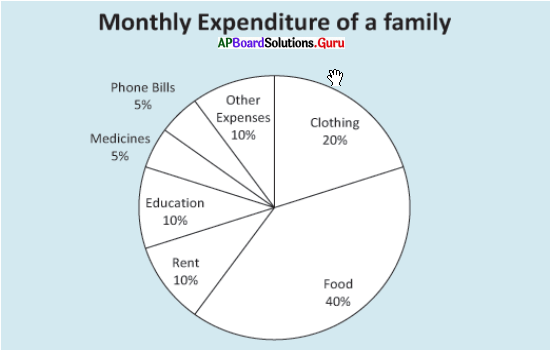 Let’s go through the description of the Pie-chart.

Now, answer the following questions.
1. How many items are mentioned in the chart?
2. On which item does the family spend more mohey?

Choose the correct answer from the choices given below and put a tick (✓) mark.
3. Which of the following took the same percentage of expenditure?
a) rent and phone bills
b) rent and education
c) rent and medicine

B. Here is the dictionary entry of the word ‘soil’. Read it carefully.

Fill the following table based on the information given above. The first one is done for you. 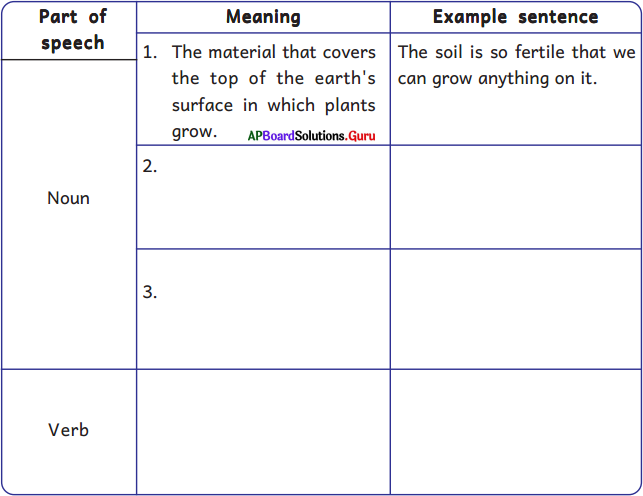 I. Can you answer the following questions? Try.

II. Match the expressions with their contextual settings.

Malasha and Akulka were little girls studying sixth class. One day they were dressed in new clothes. It was a rainy day. They gathered at a large puddle across the street. They were playing at the puddle. Malasha plumped her foot into the water. And the muddy water splashed and fell non-Akulka’s new dress. On seeing this Akulka became angry and ran after Malasha. Malasha started running towards her home. On their way, Akulka’s mother saw that and slapped Malasha’s face. There started a quarrel between the two families. The two families were busy with their quarrel. But the two girls forgot their quarrel and went to the puddle to play there. They were busy laughing, running, and jumping along the rill. An old woman showed the quarreling people how the two girls were playing happily forgetting their quarrel. On seeing the girls playing ‘ * together, they felt ashamed and left the place.