Question 3.
Explain why the Mediterranean Sea was named so?
Answer:
The Mediterranean is derived from the Latin words meaning “the middle of the earth.” During the time of the Roman empire little was known about far Eastern Asia or the Americas or Southern Africa and so the Romans considered they lived in the hub of the universe.

Question 4.
Explain the location of Europe.
Answer:
Europe extends from 35° South to 72° North latitudes and from 10° West to 60° East longitudes. Europe has an area of 10,180,000 square kilometers approximately. It is the second smallest continent. The boundaries of Europe are North – Arctic ocean; South – Mediterranean sea, Caspian and Black seas; East – Ural mountains, West – Atlantic ocean.
The Ural Mountains separate Europe from Asia. The Mediterranean sea separates Europe from Africa. The Mediterranean sea separates Europe in the North from Africa in the South.

Question 6.
Explain about the mountains and plains of Europe.
Answer:

Question 7.
Find out the names of some of the other Island countries of Europe.
Answer:

Question 8.
What are the important crops that are grown in Europe?
Answer:

Question 9.
What are trade winds? Explain.
Answer:
The ships of those times had sailed to harness wind power. They sailed with ease with the winds blowing westwards towards America. These winds blow westwards taking ships from Europe to America. These were not the Westerlies, which blew towards Europe. These were different winds, which blew from the south of Europe towards the southwest direction. They blew throughout the year and took ships from southwest Europe to the east coast of America. These winds are called ‘Trade Winds’.

Question 10.
The Alps stretch across several countries. Find out the names of these countries.
Answer:
France, Italy, Austria, Hungary, etc.

Question 11.
Write the names of two rivers starting from the Alps.
Answer:
Danube and Rhine.

Question 12.
Name the countries across whose borders the Pyrenees stretch.
Answer:
Spain and France.

Question 15.
Names of oceans or seas into which the following rivers empty themselves.
Answer:

Question 17.
When does it rain most in your state, in the summer months or in the winter months?
Answer:
In rainy months.

Question 18.
Find out if your region gets light winter showers and the name given to it in the – regional language.
Answer:
Dussehra Musurlu.

Question 19.
Fishing is of importance in …………. whereas fruit growing is important in ……….
Answer:
Coastal areas; Mediterranean countries.

Question 21.
To begin with which part of Europe is along the Atlantic Ocean – the eastern or the western part?
Answer:
Western part.

Question 22.
Observe the following table carefully and answer the questions.

Question 23.
What is the Dogger Bank? Name the countries which would benefit from the Dogger Bank.
Answer:
The warm currents are very good for fish breeding as they contain ample food materials for the fish. As a result, the fishery industry is very well developed in the North Sea near Britain. This part of the North Sea is called ‘Dogger Bank’. Fish is an important part of the food of the Europeans and fishing is a very important industry in Europe. United Kingdom, Belgium, Netherland, Denmark, Norway, and Sweden would get benefit from Dogger Bank.

Question 25.
Can you guess the impact of the Westerlies on Europe?
Answer:
The westerlies play an important role in carrying the warm, equitornal wates and winds to the western coasts of continents, especially in the southern hemisphere because of its vast oceanic expanse. 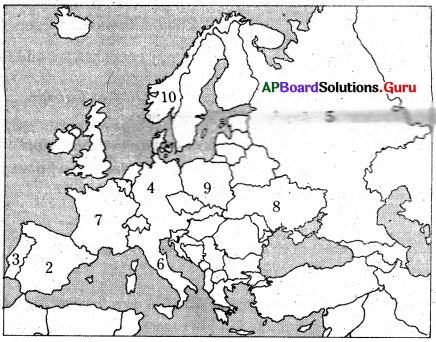 Question 29.
Observe the map and answer the following. 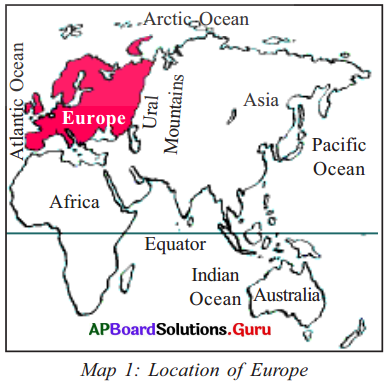 a. Name the mountains to the east of Europe.
Answer:
Ural mountains.

b. Name the ocean to the west of Europe.
Answer:
The Atlantic Ocean.

c. Look in the atlas and find the name of the sea just south of Europe.
Answer:
The Mediterranean Sea.

Question 30.
Now you are familiar with the location of Europe. You can take a look at the countries of Europe. Look at the following map to find out their names. Have you heard of some of these countries before? 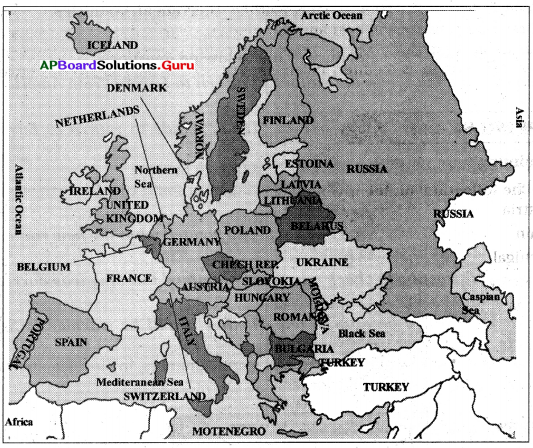 Question 31.
Observe the map and answer the following questions. 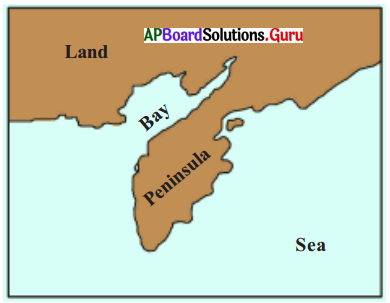 a. Which of these is a peninsula Greece of France?
Answer:
Greece

b. Are Spain and Portugal peninsulas, too?
Answer:
Spain is a peninsula, but Portugal is not a peninsula.

Question 32.
i) Look at a globe to see how far is north Europe from the Equator.
Answer:
Europe is 350 latitudes North of the Equator.

ii) Is Europe even farther north than India?
Answer:
Yes.

iii) Will Norway be warmer than Italy? Why?
Answer:
No, Norway is cooler than Italy because it is on higher latitudes.

Question 33.
Look at the wall map or atlas to identify the names of at least six cities of Europe which are situated on the sea coast.
Answer:
Moscow – Russia
London – U.K.
Berlin – Germany
Istanbul – Turkey
St. Petersburg – Russia
Madrid – Spain

Question 35.
Look at Map 6 (Text PAT) and answer the following questions.
i) Which winds would help the sailors to return to Europe from America?
Answer:
Trade winds.

ii) Looking at the globe to check whether Columbus’ thinking was correct?
Answer:
Yes, he was correct.

iii) Look at the map to be able to tell whether it will be warmer in Spain or in Slovakia. .
Answer:
In Spain – there will be mild winters and warm summers. In Slovakia – temperate cool summers, cold, cloudy, humid winters.