Question 1.
When was the Vijayanagara Kingdom founded?
Answer:
1336 CE

Question 2.
Who were the founders of the Vijayanagara Kingdom?
Answer:
Hari Hara Raya and Bukka Raya.

The another name is battle of Tallikota. 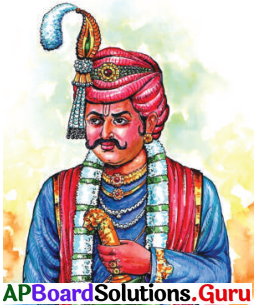 Question 20.
Collect a song from old telugu movies on the constructions of the the Vijayanagara Empire and Sri Krishna Deva Raya.
Answer:

Question 21.
Get the story behind the selection of place of the Vijayanagara empire and discuss in the class.
Answer:
Once, during a hunt, Harlhara saw a big rabbit and sent his hunting dog after it. However, the rabbits chased the dog and escaped. While returning from the hunt, Harihara saw a holyman, and narrated the strange incident to him. The holyman was Vidyaranya. The two men went to the place where the rabbit chased the dog. Vidyaranya told him that the place was sacred, and advised him to establish the capital of his new kingdom there.

Question 22.
What do you know about Amaranayakas?
Answer:
A) AMARA NAYAKAS were those who exercised power in the Empire were military chiefs who usually control forts and had armed supporters.

B) These chiefs often move from one area toanotherand in many cases were accompanied by persants looking for fertile land on which they could settle. These chiefs were known as Nayakas.

C) The Amaranayaka system was a major political innovation of Vijayanagara empire.The Amaranayakas form military commandars who are given territories to be governed by the Raya.

Question 24.
Write the names of Astadiggajas and their writing books in a tabular form.
Answer:

2. The capital of Vijayanagara Kingdom
A) Bangalore
B) Hampi
C) Vijayawada
D) Guntur
Answer:
B) Hampi

3. The city of Vijayanagara was located on the banks of the river …………..
A) Krishna
B) Godavari
C) Tungabhadra
D) Kaveri
Answer:
C) Tungabhadra

5. The sage with whose blessings Hari Hara and Bukka founded the Vijayanagara kingdom was …………..
A) Vidyaranya
B)Vidyanadha
C) Ramanuja
D) Vijayaranya
Answer:
A) Vidyaranya

22. The famous music of Vijayanagara empire
A) Carnatic
B) Hindustani
C) Indolam
D) None
Answer:
A) Carnatic

The Ruins at Hampi were brought into light in 1805 by an engineer and antiquarian named Colonal Collin Mackenzie. He was the employee of the English East India company and also the first Surveyor General of India

Elephants are slow-moving but powerful in attack during wars.

Animals played a crucial part in the war effort. Horses, donkeys, mules, and camels carried food, water, ammunition, and medical supplies to men at the front, and dogs and pigeons carried messages. The canaries were used to detect poisonous gas, and cats and dogs were trained to hunt rats in the trenches.

List of Foreign Travelers who visited during Vijayanagar Dynasty